The Photographer Taking Davante Adams To Court Is Perfectly Playing The Hand He Was Dealt, Actually 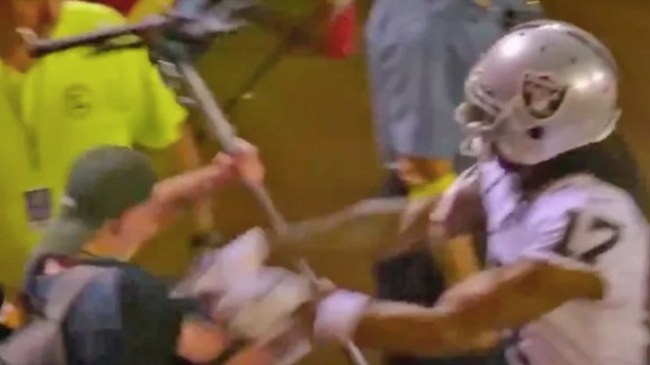 Surely you’ve noticed a slick wet spot on a bright white tile floor at a national chain supermarket or a department store and thought to yourself, “What would happen if I were to just take an ‘accidental’ spill here?” And if you never have, then good for you, I suppose: you truly are holier than thou.

The above, of course, is an example of insurance fraud, wherein you’re manufacturing a hazardous situation in order to reap the financial benefits. But what happens if you, truly and innocently, were to actually slip on that floor? Would you let Burlington Coat Factory or ShopRite or Burger King or whatever capitalism monstrosity you happened to fall inside of slide because it was an accident? Would bygones really be bygones? Or would you hire a lawyer and try to take those corporate bastards for all they’re worth, reminiscent of the lady who sued McDonald’s for their hot coffee almost 30 years ago? That’s what I thought.

The photographer who filed charges against Davante Adams for his Monday Night Football shove is doing exactly what anyone else would do: cashing out

And that, ultimately, is what the photographer who brought up charges against Davante Adams (and his brand new $140 million contract) is doing: he slipped on the supermarket’s floor and now he’s going to make the company — not the cashier, not branch manager, not the CEO — pay.

The photographer shoved to the ground by Davante Adams after the Raiders-Chiefs game has officially filed a police report against the NFL superstar, claiming he was injured during the incident and had to go to the hospital.

Authorities tell us the man claimed he was the victim of an assault. They say he told them he suffered injuries … though they were “thought to be non-life threatening.” They added that the man was later transported to the hospital. [via TMZ]

Granted, while it’s never safe to assume — especially when it comes to someone else’s intentions — perhaps this unnamed photographer is trying to get Adams caught up in legitimately legal trouble, which, admittedly, would be way lamer than simply trying to settle out of court. The fact is that Adams handed this dude the lottery ticket for virtually assaulting him on national television and he would be a fool not to cash it at his earliest convenience.