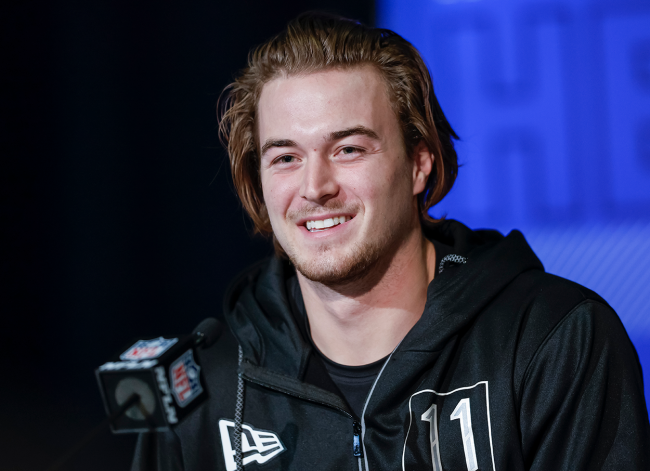 There is a very good chance that this situation doesn’t play out as planned. And, whether it does or doesn’t, there are only a handful of outcomes, but we’ll get to that later.

As things currently stand, a Pittsburgh Steelers fan is set to get a full back tattoo of Kenny Pickett’s jersey.

Pickett, who played his last five years of college football at Pitt, was drafted No. 20 overall by the Steelers during the NFL Draft on Thursday night. The Panthers also play at Heinz Field, so he doesn’t have to go far to begin his NFL career.

Five months prior to Pickett being picked, there was a lot of buzz about the idea of the “hometown kid” staying home. As a result, a big Steelers fan made a very bold claim about getting a tattoo if that exact scenario played out.

Well, that exact scenario played out. But ‘doyle’ gave himself an out.

He was hesitant to commit to getting Pickett’s jersey tattooed on his back, so he gave himself another set of stipulations. He tweeted at Pickett and said that if the first round quarterback was to reply, only then would he get the tattoo.

Well, that exact scenario played out.

Now ‘doyle’ is on the clock.

Will the Pittsburgh Steelers fan tattoo Kenny Pickett’s jersey on his back?

His retweets indicate that he will.

However, if he does, there are only a few outcomes.

If he doesn’t get the tattoo, there are also a few outcomes.

The third option has already been offered to him.

Kenny, give him an out – if he donates double the cost of the tattoo to Children’s Hospital of Pittsburgh, “let ’em slide” pic.twitter.com/kcjEEOrvwr

And now we wait. Will he get the tattoo or will he back out and donate to charity?