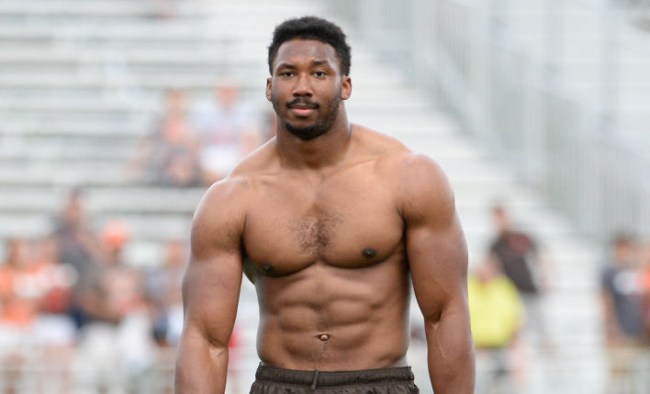 As someone who stands at 6’10” and around 275 pounds, I can confidently say there are plenty of perks that come with being my size.

However, there are more than a few downsides to being freakishly large, and over the years, I’ve encountered some drunk dudes who thought it would be a good idea to prove themselves by challenging me to fisticuffs before their friends stepped in to make them see the error of their ways.

As a result, I haven’t been on the receiving end of a punch since I was in middle school but the same can’t be said for Browns defensive end Myles Garrett, who was minding his own business on Wednesday when someone flagged him down to take a picture before clocking him and running away.

As you’re already very aware if you took a look at the picture at the top of this post, Garrett is a Certifiably Large Dude.

However, according to WKYC, the same can’t be said for the dude who allegedly threw a punch at him, as police claim they’ve identified the suspect, who stands at a towering 5’7″ and weighs in at a staggering 160 pounds.

The outlet says that no charges have been filed against the man, and while I know the whole “eye for an eye” thing is usually frowned upon in modern society, I’d be lying if I said I didn’t wish the punishment for this crime was to give Garrett one free shot at the dude who punched him.