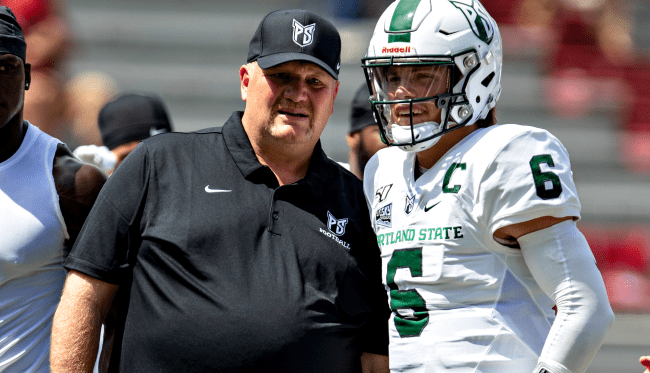 Unlike the big BCS programs, smaller college football programs sometimes have to do a little extra to pack the stands for their games.

Portland State head coach Bruce Barnum understands this, so in an effort to help fill 7,600-seat Hillsboro Stadium this week he’s made a very unique offer to fans: he’ll buy their beer if they come to the game. All of it.

On Tuesday, while appearing on The Oregonian columnist John Canzano’s podcast, coach Barnum said he’s dead serious about his offer.

“I’ve got to get people to see my kids. I like my team,” said Barnum.

This Saturday, as his Vikings (0-2) take on Western Oregon in their home opener, his team will have some competition for eyeballs as both Oregon and Oregon State are also playing at home.

“I’ve got a deal for you,” Barnum continued, “Anybody who heard me your show… just say ‘I heard Barney on the BFT’ at the Barney Beer Garden and I’ll buy your beer.

“I’m not buying your ticket, but I’ll buy your beer.”

“I’m not buying your ticket, but I’ll buy your beer.”

Said Barney: “All of them.”https://t.co/EXlurVQE7d

When asked how many beers he would pay for, coach Barnum replied, “All of them.”

He added, “I don’t care if you’re watching the Oregon (or Oregon State) game, watch them on your phone. Buy your ticket and come to the game, I think you’ll like what you see.”

So, after doing a little math, if you like beer, like college football, and live in the area around Portland, this is one hell of a good deal. Fans, for the most part, agreed.

This is why Barney is a legend

Now that’s a coach! Hells to the yes, good stuff.

Oh my god I need to fly to Portland

I like it but it seems bit dangerous. You don’t have to think too hard to envision the possibilities. 😅