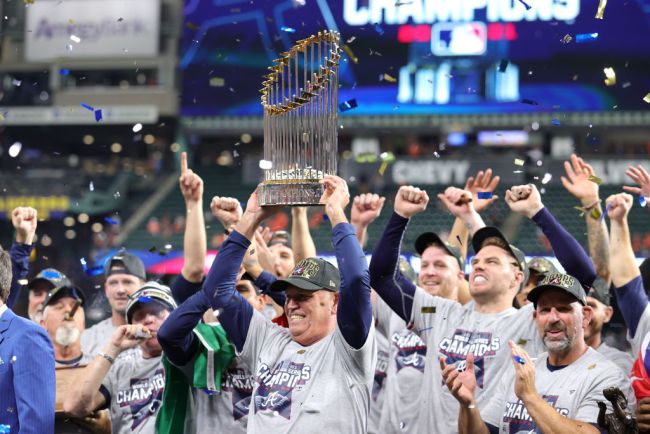 Atlanta Braves over the Houston Astros in 6.

However, to predict the exact result of the World Series more than five years in advance is downright insane. The only explanation is witchcraft or time travel.

Well, a baseball fan by the name Cole Rogers did just that.

Remember on this date, 10/25/16, I predicted the Atlanta Braves to win the 2021 World Series when we graduate from college @rob_morosetti22 pic.twitter.com/hHlsWS89kl

Haters might speculate that this is fake because anyone can post a screenshot. Sure, but Rogers’ physical tweet was sent on Oct. 25, 2016, 1,835 days before the Atlanta Braves beat the Houston Astros in six games to win the 2021 World Series.

Sure, Houston and Atlanta isn’t Oakland, per say. But in the year that Rogers predicted this year’s World Series result, the Braves went 68-93 and the Astros went 84-78. And this year, an 88-win team won it all.

That all goes to say that it wasn’t a particularly “safe” prediction.

In response to the remarkable (and very lucky) prophecy, the internet went bananas:

the fuck going on??? pic.twitter.com/S4NvAwXcw6

Nice try…. We all know Wi-Fi wasn’t around back then….

Big deal, one time I knew the light was turning green so I hit the gas perfectly and zoomed right thru that bitch

Will i get a girlfriend soon?

Tell me Michigan is beating Ohio State in football this year 🙏🏼

……are you like a time traveler, psychic man, wizard, god? pic.twitter.com/9mKDBGMynS

nah bruh , this mf got the almanac from back to the future.

Well yea, no one would’ve cared 5 years ago. It only blew up because it actually came true.