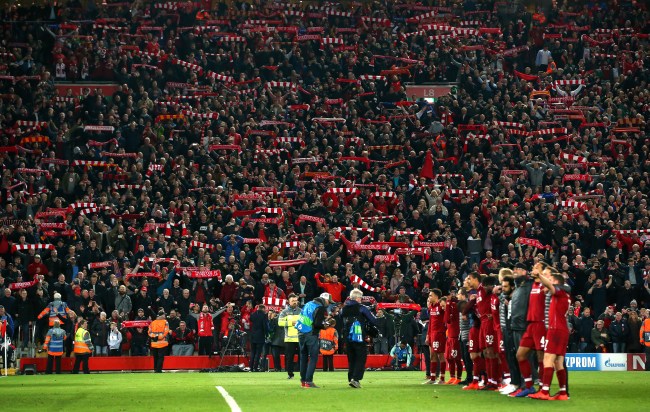 Do you follow me on Twitter? If you do, congratulations! And if you don’t — if you enjoy movies, TV, video games, or soccer — then come join me! I’m probably good for 2-3 legitimate funny tweets per week.

The rest of my tweets, though, are borne strictly out of self-interest: my Twitter feed is essentially me talking about the things that I love, such as Liverpool Football Club.

Somewhat selfishly, the biggest personal concern I’ve had since the outbreak of The Big Cancel is the ramifications it could have on the Premier League just as Liverpool is closing in on their first title in 30 years. So, naturally, whenever a piece of positive news regarding their eventual Premier League victory is announced, I retweet it with the iconic clip of Stephen A. Smith dancing to “Trophies”. It makes me laugh literally every single time.

This morning, another piece of key news broke, as the FA announced that — while league play will not resume until at least April 30 — they remain committed to completing the 2019-20 season, meaning it’s now simply a matter of when Liverpool lift the Premier League trophy, not if.

The FA, Premier League, EFL and women’s professional game, together with the PFA and LMA, understand we are in unprecedented times and our thoughts are with everyone affected by COVID-19.

We are united in our commitment to finding ways of resuming the 2019/20 football season and ensuring all domestic and European club league and cup matches are played as soon as it is safe and possible to do so.

We have collectively supported UEFA in postponing EURO 2020 to create space in the calendar to ensure domestic and European club league and cup matches have an increased opportunity to be played and, in doing so, maintain the integrity of each competition. [via Premier League]

CUE THE STEPHEN A!