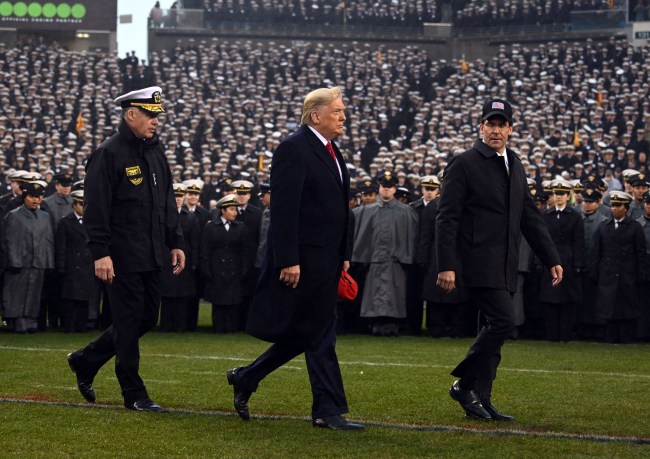 President Trump attended the 120th Army-Navy football game this afternoon in Philadelphia for the third time in his presidency. Before the game, Trump spoke with players from both teams and announced that service academy athletes will be allowed to play professional football after graduation thanks to a new waiver.

"You'll go out and you'll make a fortune, and after you're all finished with your professional career, you'll go and you'll serve."

Trump gave a pep talk to the Army's Black Knights and referenced a waiver for service academy athletes who want to play in the pros #ArmyNavy2019 pic.twitter.com/UngEGT5HMv

Trump was later introduced to the crowd before the coin toss and was loudly cheered.

LISTEN: President Trump stands on the field for the national anthem before the Army-Navy football game. pic.twitter.com/CnUDk7JiJl

President @realDonaldTrump is welcomed with loud applause to the Army/Navy game
pic.twitter.com/4wtI8hz02s

It sure seems like our troops, their families and their supporters attending the #ArmyNavy game are big fans of President @realDonaldTrump. pic.twitter.com/fgUOMalU3l

President Trump flips the coin before the Army-Navy game at Lincoln Financial Field. It landed on tails pic.twitter.com/4Y6U4yIfFc

It seems like Trump has figured out that football crowds treat him better than he was treated at the World Series where he was booed earlier this year.