President Trump Calls Roger Goodell A Dope, Claims Bill Belichick Once ‘Hugged, Kissed Him And Called Him The Greatest’ 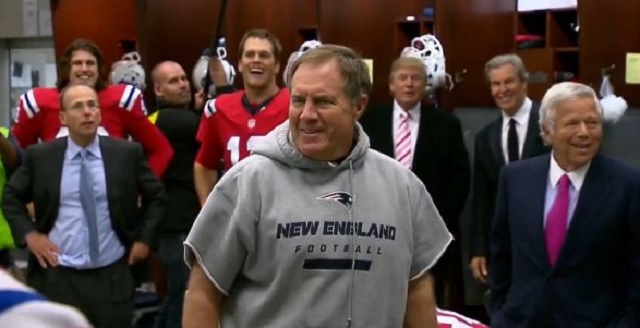 On Wednesday, Mark Leibovich of New York Times Magazine published a story on the relationsip between President Trump and the Patriots.

In the story, Leibovich revealed what Trump told him in the fall of 2015 about NFL commissioner Roger Goodell and let’s just say The Donald isn’t a fan.

Trump went on to talk about Patriots head coach Bill Belichick, whom he consider a close friend.

“So I go to the Patriots game last year,” “I’m on the sidelines with Kraft. He’s got [CBS chief executive officer] Les Moonves right here. He’s got a lot of different people. And Belichick comes over in his Patriots sweatshirt and the hoodie and the whole thing. He hugs me, and he kisses me, and he said: ‘I love you. You’re the greatest.’ He just feels warmly toward me, Belichick does. Isn’t that the craziest thing?”

I’m having a hard time believing Belichick would be so warm considering I’ve never seen him show any ounce of emotion.