President Trump Shows Support For Drew Brees Amid Controversy, Says Players Should Not Protest During Anthem ‘No Kneeling’ 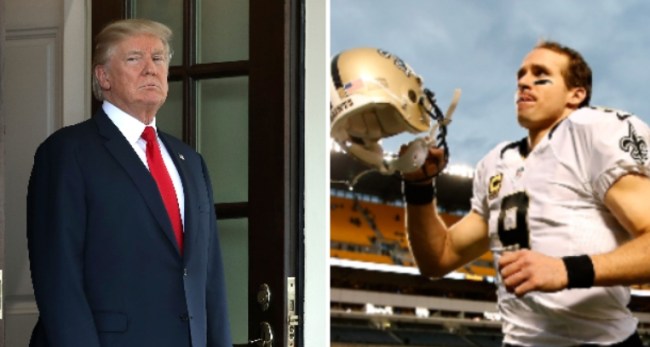 President Trump has issued a response to the Drew Brees controversy.

Earlier this week, the New Orleans Saints QB found himself in hot water when he said players who kneel during the anthem to protest police brutality are “disrespecting the flag”.

After several of his teammates called him out, Brees issued several apologies for his comments.

"I’m sorry it has taken this long to act and to participate in a meaningful way, but I am your ally in this fight."

On Friday, Trump came to Brees’ defense while also denouncing players who kneel during the anthem in protests.

I am a big fan of Drew Brees. I think he’s truly one of the greatest quarterbacks, but he should not have taken back his original stance on honoring our magnificent American Flag. OLD GLORY is to be revered, cherished, and flown high…

…We should be standing up straight and tall, ideally with a salute, or a hand on heart. There are other things you can protest, but not our Great American Flag – NO KNEELING!