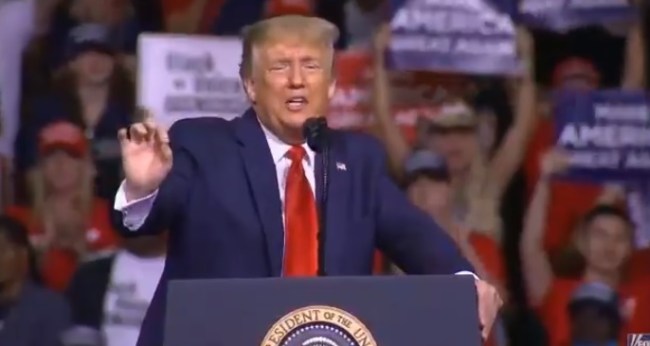 It looks like President Trump is getting ready to go war with the NFL over national anthem kneeling.

Just a few weeks ago, NFL commissioner Roger Goodell released a statement apologizing for not listening to players earlier about the Black Lives Matters movement and encouraged them to peacefully protest whoever they see fit.

Since then several players including Kyler Murray and Baker Mayfield have said they will kneel during the anthem this season.

Cleveland Browns QB Baker Mayfield plans to kneel during the National Anthem. Mayfield the former Oklahoma Sooners QB explains in statement why he made decision pic.twitter.com/jmcC0eaMhg

During his rally at Tulsa, Oklahoma on Saturday, Trump took aim at Goodell and kneeling players.

Trump: "I like the NFL. I like Roger Goodell, but I didn't like what he said a week ago. … We will never kneel to our national anthem or our great American flag. We will stand proud and we will stand tall."

Trump on NFL… “I thought we won that battle with the NFL. Their stadiums were emptying out”

Trump takes a shot at Roger Goodell over NFL's Black Lives Matter statement "Where did that come from nobody was even asking" "We will never kneel to our national anthem or to the American flag"…."I thought we won that battle with the NFL" pic.twitter.com/QOdPCGsI7z

The NFL are going to have to prepare to withstand blowback from the President and his supporters because it appears that several players are deadset on kneeling during the anthem this season.