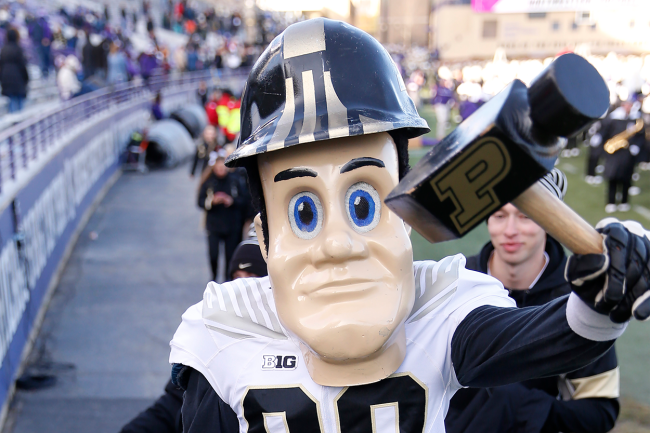 The Purdue Boilermakers are set to roll out one of the greatest, if not the greatest throwback helmets of all-time this September. They are truly phenomenal.

Since 1950, Purdue has had six different primary logos.

Its current logo has been used since 2012. It is the most simple and name-forward, but it’s also the most lame.

Prior to 2012, Purdue used a fairly modernized Boilermaker from 1996 on.

Before taking a more modern approach to the train, Purdue used a more simple version for two years in the mid-90s. It’s great from a throwback standpoint, but it definitely needed an upgrade.

Prior to 1980, the university used Purdue Pete, the school’s on-field mascot. He is a jacked dude who reflects a boilermaker tradesman with a mallet for molding steel and hat to keep grease out of his hair.

The initial Purdue Pete logo was introduced in 1950 and stood for 20 years.

And then the school redesigned Purdue Pete in 1970. They used that logo until the shift to the Boilermaker in 1980.

Since making the switch to the steam train, Purdue has only used Purdue Pete as the sideline mascot. He is still engrained in the school, but he has not been a big part of uniforms, logos or any sort of branding— until now.

The Boilermakers are going to wear Purdue Pete helmets for their homecoming game against FAU on September 24th and they are absolutely perfect in every single way.

The throwback helmets are better than Purdue’s normal ‘P’ helmets. And it’s not even close. Oregon’s throwback uniforms, as a whole, are probably the best-ever, but the Purdue Pete helmets are hard to make a case against. They’re beautiful.