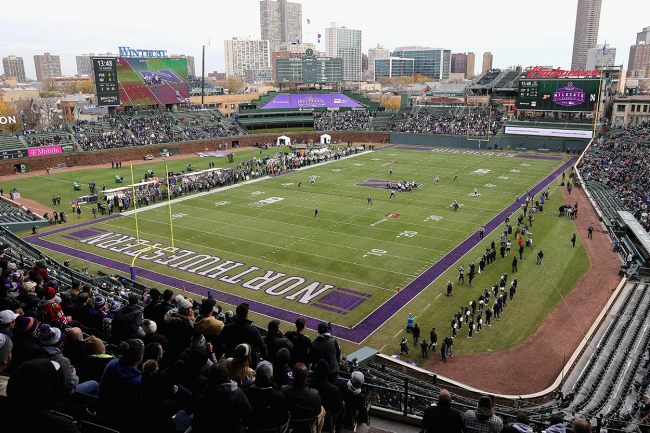 For the first time in 11 years, college football was played at Wrigley Field on Saturday. Northwester, which calls itself “Chicago’s Big Ten team,” hosted Purdue at the Friendly Confines and it made for a wild second-half kickoff.

Although the field itself looked absolutely gorgeous, there is a reason that football is played on a football field. That was exemplified in as the Boilermakers went to begin the second half.

Senior grad transfer kicker Mitchell Fineran lined up to boot it away. Everything looked as it should and he proceeded to take his six-step run up to the ball.

The first five steps went as planned, but the sixth did not. As Fineran went to plant his left foot, it slipped out from under him.

Falling as he made contact with the football, he could not boot it downfield. Instead, the ball barely got off of the turf and floundered toward the Northwestern return team.

However, on the receiving end, the Wildcats could not hold onto the ball. It bounced off of a man in purple and rolled around on the ground for a moment.

With the ball on the ground, the Purdue kickoff team was quick to pounce on the loose ball and recovered the kick. It was the worst, most bizarre accidentally successful onside kick of all-time.

Take a look at the play in all of its glory:

After recovering the kick and gaining possession, Purdue went 49 yards on seven plays and punched it in. Six points, all because of the grass at Wrigley Field.