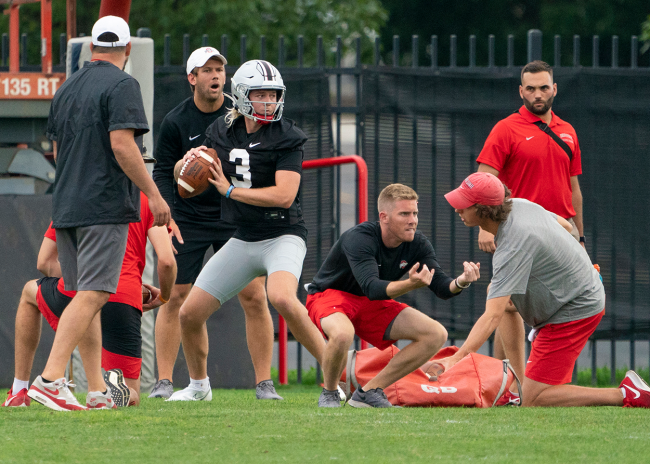 Texas football is less than a week away from spring practice and there are a lot of eyes on Austin. Not only have the Longhorns been unimpressive in recent seasons, but head coach Steve Sarkisian is expected to win in his second year with the program.

In addition, there are a lot of question marks. The team has added a lot of talent this offseason and the quarterback room is loaded.

Five-star quarterback Quinn Ewers transferred into the program during the offseason and Hudson Card is a former four-star All-American in his own right. Card began last season as the starter and will be the veteran. Ewers will be the highly-touted first-year gun-slinger trying to become the face of one of the biggest programs in the country.

The most recent update from spring semester workouts alludes to the job being wide open. Either guy could earn the right to be QB1 for Texas.

With that being said, the expectation is that Ewers will win the job outright.

Quinn Ewers and his glorious mullet will likely be the starting quarterback for the University of Texas come Week 1.

With spring ball set to begin on March 20th, the team will get back on the gridiron after spring break. In the meantime, some of the players might be enjoying some downtime on the beach. Others are getting some work in before the season officially begins and Ewers is one of them.

Obviously, throwing against air is not going to tell the full story. However, his motion looks smooth and he is delivering his passes with some serious zip.

Will Ewers be able to bring the Longhorns back to relevance? Only time will tell.