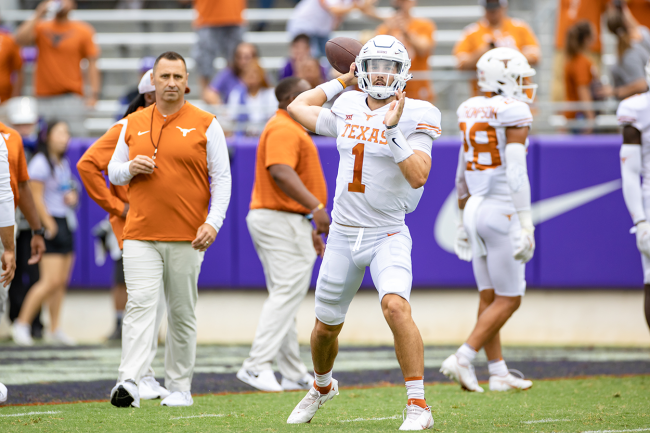 Texas football is set to begin Year 2 under head coach Steve Sarkisian with spring practice on March 22nd. When the Longhorns take the field, there is a lot of work to be done after going 5-7 last year, and quite a few questions that will need to be answered.

The most pressing issue comes under/behind center. A two-man quarterback battle is set to take place in Austin.

On one side is the veteran Hudson Card. On the other is the first-year Longhorn Quinn Ewers.

Card, a 6-foot-2, 200-pound redshirt sophomore has played in 10 games with two starts. He was a four-star, All-American prospect out of high school and began 2021 as the starter for the Longhorns.

However, after a blowout loss to Arkansas, Card was benched in favor of Casey Thompson. He has had a full year in Sarkisian’s system and is a talented, physical dual-threat quarterback with a chance to dazzle the Longhorns staff throughout the spring and summer.

Ewers, one of the most hyped quarterbacks of all-time, comes to Texas by way of Ohio State. The five-star recruit left high school early to enroll with the Buckeyes but was beat out for the starting job as a freshman, redshirted and chose to transfer after the 2021 season.

Following a pretty clear-cut transfer process, Ewers landed back in his home state with the Longhorns. The expectation amongst fans and analysts alike is that the highly-touted prospect will win the starting job with his strong arm, pin-point accuracy, ability to move in the pocket and overall on-field swagger.

But with that being said, he is only 18 years old and will be going through his first spring practice with a program this year— he may not be ready yet. It is not Ewers’ job until he earns it.

Thus, spring practice at Texas will be very telling.

As of right now, the two-man quarterback battle is wide open. There is no frontrunner— either Ewers or Card will have to win the starting job outright.

According to Justin Wells of On3 Sports, both guys have been getting equal work leading up to the March 22nd practice. Card and Ewers are currently splitting reps with the first-team during throwing sessions and gaining equal familiarity with the No. 1 receivers.

Card, who is more quiet, is reportedly coming out of his shell and becoming more vocal. He is also said to be spinning the pill very well.

Ewers, who has immediately earned the team’s respect, is showing great attitude, work ethic and natural ability. He is considered to be more down-to-earth than might be expected from a player with such significant hype around him and his arm is as-advertised.

Again, it would be a surprise if Ewers was not QB1 in Week 1 against Louisiana-Monroe. For that to happen, it would mean that Card played lights-out in spring practice and over the summer. The battle really begins in 11 days.