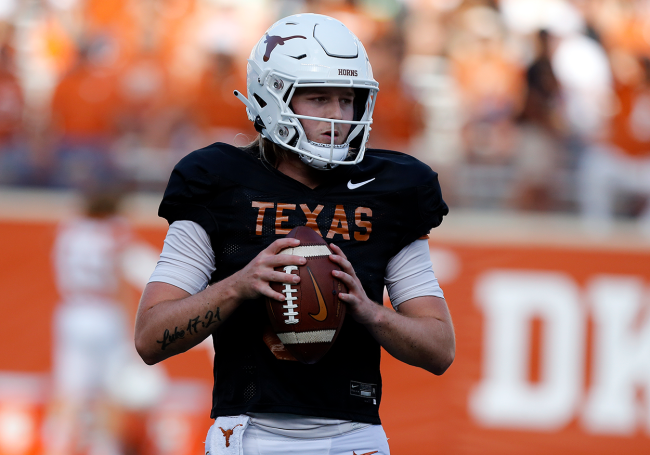 The quarterback battle at the University of Texas is not over. Head coach Steve Sarkisian has not announced who will be under/behind center during Week 1 for the Longhorns when they host the Lousiana-Monroe Warhawks on September 3rd.

In fact, considering their opponent, there is a good chance that everybody on the roster gets a chance to see the field in the second half, should things go according to plan.

As things currently stand, former five-star transfer Quinn Ewers and redshirt sophomore Hudson Card are in contention for the starting job. Either guy could win the spot atop the depth chart during fall camp this summer.

Ewers comes to Austin after reclassifying to the Class of 2021 and enrolling at Ohio State during his freshman season last year and has a lot of hype around the player that he was in high school. Card, a 6-foot-2, 200-pound redshirt sophomore has played in 10 games with two starts. He was a four-star, All-American prospect out of high school and began 2021 as the starter for the Longhorns.

By all accounts, it’s neck-and-neck, though we don’t know the whole truth and can’t see the whole picture. Card was reportedly the most consistent of the two during spring ball and knew the offense better, having played a full year in Sark’s system. Ewers reportedly has that “wow” factor.

Most national analysts expect that the young phenom will get the nod when it is all said and done. Either way, Ewers looks the part.

Texas recently unveiled its 2022 team photos and Ewers looks like an animal. The 19-year-old is rocking a messy, untrimmed beard that pairs perfectly with his raging, untamed mullet. On his left arm, his Luke 17:21 tattoo is in clear view.

Everything about his look is perfect. He is one of the most profitable college athletes in terms of NIL valuation and it’s not hard to see why.

What company wouldn’t want Ewers to be the face of their marketing campaigns?

This is exactly what I want QB1 at the University of Texas to look like. No notes pic.twitter.com/taEwOd4CsO

Should Ewers win the starting job this fall, there is a lot of hype around his play backing up his look. He has not played but a few downs as a redshirt at Ohio State and has yet to attempt a pass on the collegiate level. If this is the year that Texas is truly back — and if I’m a Longhorns fan — Ewers is the guy I want leading my team into battle with Alabama in Week 2 based solely off of his look.