Sorry, The Raiders And Chargers Won’t Be Taking Knees For 70 Straight Minutes On Sunday 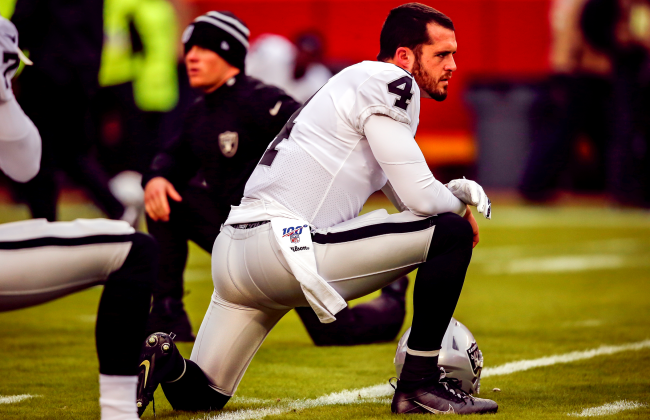 In one of the most bizarre quirks in NFL history, the Las Vegas Raiders and the Los Angeles Chargers could end up taking knees their entire game so that both teams make the playoffs.

Sure, it’s unlikely, but it legitimately could happen. Here’s how…

If the Jacksonville Jaguars beat the Indianapolis Colts on Sunday then the Sunday night game between the Raiders and Chargers would be for the last AFC playoff spot. However, should San Diego and Los Angeles tie, then they both get playoff berths and Indy would be sent packing.

Because the Colts would then be 9-8, while the Chargers and Raiders would each be 9-7-1.

How likely is this to happen?

The Colts are currently a 15.5 point favorite over the 2-14 Jaguars. However, over their past 33 games, the Jaguars are 2-2 against Indy while going 2-27 against the rest of the league. Also, Jacksonville has won the last six meetings when the game has been played at TIAA Bank Field. They’re 15-35 versus everyone else.

Unfortunately, it sounds like the outcome of the Colts and Jaguars game isn’t going to matter much to the Raiders and Chargers.

Chargers coach Brandon Staley told The Rich Eisen Show, they won’t be kneeling down for 70 minutes on Sunday.

“This game matters too much to too many people, and we want to play our best and be proud of the result one way or another,” said Staley. “We’re going to do everything we can to go win this game, and play the way we’re capable of playing. I hope all the fans and everybody who loves the NFL will be proud of the game on Sunday.”

Meanwhile, over in Las Vegas, Raiders quarterback Derek Carr also says he won’t be taking knees all game, regardless of what happens in Jacksonville.

“Someone said we could just take knees and tie if that’s the scenario,” said Carr. “I was like, ‘Well, that sounds good to you, but I don’t want to tie these guys either.’ To me, it will be full focus on beating the Chargers, and I’m pretty confident that’s how our whole team feels, no matter what. You know, they beat us last time. We kind of just want to play this game.”

Bummer. Because that would have been hilarious.

Should still be fun though!