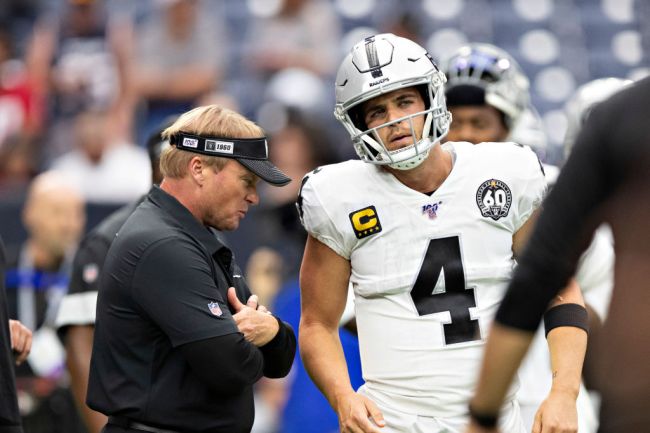 Raiders QB Derek Carr has finally reacted to the Jon Gruden email scandal and he has some thoughts on how the NFL should handle coaches and GMs emails in the future.

On Monday night, Gruden resigned as head coach of the team after a flurry of his old emails sent to former WFT exec Bruce Allen showed him making racist, homophobic, and misogynistic at several people from around the league.

“I have resigned as Head Coach of the Las Vegas Raiders. I love the Raiders and do not want to be a distraction. Thank you to all the players, coaches, staff, and fans of Raider Nation. I’m sorry, I never meant to hurt anyone.”

ESPN recently sat down with Carr, who is close with Gruden, to get his thoughts on the email scandal.

I mean I’m sick about it. I have a lot of emotions — angry, sick, upset, mad, frustrated. All those things. Empathy. I don’t think there is a book on how to handle all this, or actually there is, but I don’t think that there is a way for a quarterback to stand up here and answer these types of questions is what I should say. But for me, my message today was we have a job to do. It’s Wednesday, if we are still in our feelings, it’s too late. We got to move on.”

During the interview, Carr said he didn’t like what Gruden said in the emails but he would be interested to see what would happen if the NFL started opening up private emails from coaches and GMs from around the league.

“Don’t get me wrong, I love the man, and you hate the sin. Like for anybody, no one is perfect. If we just started opening up everybody’s private emails and texts, people will start sweating a little bit. Hopefully not too many, but maybe that’s what they should do for all coaches and GMs and owners from now on. You got to open up everything and see what happens.”

It would be really interesting to see how many GMs/coaches would lose their jobs if their emails would be made public but we all know that’s not going to happen any time soon.