Raiders Disrespectfully Hold Team Huddle On Chiefs’ Logo Before Game, Proceed To Get Blown Out 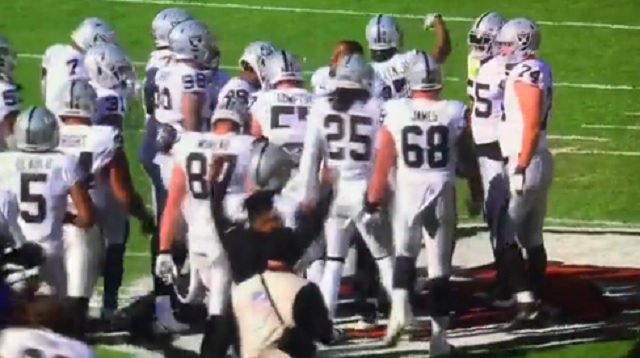 The Las Vegas Raiders thought it was a good idea to disrespect the Chiefs before their game on Sunday.

During their pregame warmups, the Raiders decided to be relocated their team huddle to midfield to stomp all over the Chiefs’ logo.

Dig this! The #raiders met as a team after their pregame warmup at about the 25 yard line. Then proceeded to relocate their team huddle to midfield on top of the #chiefs logo. The stadium erupted in boos as the Raiders fired each other up. LFG!!! pic.twitter.com/6MQOVtQ5G0

No idea why the Raiders thought this was a good idea pic.twitter.com/vSjDgy0xiU

Unfortunately for the Raiders, they gave a touchdown on the first play of the game.

The Raiders were down 28-0 before halftime and Chiefs fans mocked them,

Lol, they are down 28-0 at the half. If you are going to do this, make sure you don’t embarrass yourself in the actual game https://t.co/XglXxwEdHW

Life lesson, kids: Never fire up a good team. Chiefs have a 50-burger on the grill for the Raiders. https://t.co/sRqgVdgxo9

That's the farthest they've made it to midfield all game long. https://t.co/R81mBIKT9x

If you suck, you don't do stuff like this https://t.co/xnkDaJ2Nz0

The Raiders took a literal victory lap around Arrowhead after winning last year. This year the entire team celebrated before the game at midfield.