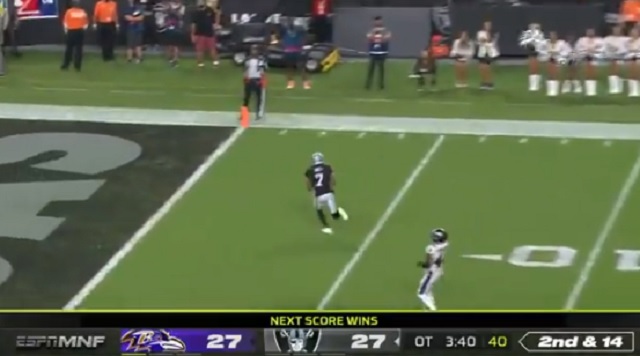 We’re only one week into the NFL season but it’s going to be hard to top the wild ending of the Raiders-Ravens Monday Night Football game.

In overtime, the Raiders believed they had won the game and were being congratulated by Ravens players after it appeared that Bryan Edwards had scored a game-winning touchdown.

Unfortunately, Edwards was short and the Raiders gave the ball away a few possessions later on a tipped interception near the endzone.

The Raiders went from thinking they won the game, to being inside the 1-yard line, to throwing an interception. 😬 pic.twitter.com/Jb6RMWJxdE

A few plays later the Ravens would fumble the ball near the 30-yard line giving the Raiders prime position to kick a field goal.

Lamar Jackson coughs it up and the Raiders (+150 ML) takeover inside Ravens territory pic.twitter.com/wopqDk0nOf

Not wanting to risk it, Raiders coach Jon Gruden decided that he wanted to kick a field goal on second down but was penalized for delay of game after he attempted to stop the clock with no timeouts left.

The #Raiders pre-touchdown failed setting up for a field goal with no timeouts was classic and made even better by Eli Manning’s reaction 😅 pic.twitter.com/1LPL1Qw96j

Gruden was forced to bring the offense back onto the field and Derek Carr throw a long touchdown pass to Zay Jones, who was uncovered down the field.

What a game. 🔥#Raiders pic.twitter.com/PIp0Xll1NM