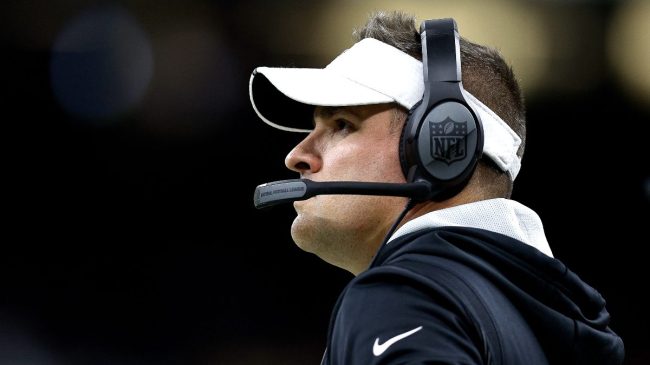 The Las Vegas Raiders are one of the most disappointing teams in the league this season. Nearly everyone had them pegged as a playoff contender. Instead, they’re at the bottom of the barrel with the fans calling for Josh McDaniels’ job. However, it turns out Vegas can’t fire their head coach for one very specific reason.

According to Bill Plaschke, Las Vegas can’t fire Josh McDaniels for financial reasons. The Raiders can’t move on from their head coach as “they don’t have the money to fire him. He’ll be the coach this year and next year.”

Report: The reason the #Raiders won’t fire Josh McDaniels is financial – “They don’t have the money to fire him.”

The team is “cash poor” and can’t afford to fire McDaniels and then pay another coach, according to @BillPlaschke

“He’ll be the coach this year and next year.” pic.twitter.com/bQ4VBSQSme

Vegas being strapped for cash is the most ironic statement one could muster. Even so, it sounds like the Raiders used their budget to hire Josh McDaniels as head coach. This is a terrible look for the organization, as nothing has gone right this season.

It gets even worse when you remember how well this team played with Rich Bisaccia leading the way as the interim. Maybe Josh McDaniels can turn things around by next season and everything will be fine and dandy. However, based on his track record, the Raiders might be doomed this and next season.