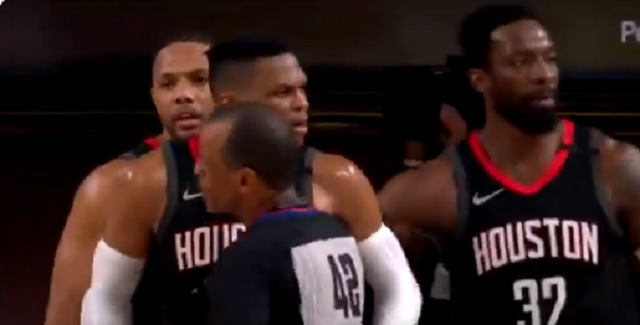 We have our first fan ejection inside the NBA bubble.

During Saturday night’s game 5 Lakers-Rockets game, William Rondo, the brother of Lakers guard Rajon Rondo, got into a verbal altercation with Russell Westbrook.
Apparently William was taunting Westbrook by waving goodbye to him which led to the Rockets guard having to be restrained by referees.

Russell Westbrook took the court after the timeout yelling “Where he at?” as he looked for Rajon Rondo’s brother William.

Russell Westbrook got into it with Rajon Rondo’s brother William 👀 pic.twitter.com/bqqN0VhSF7

Russell Westbrook went at it with Rajon Rondo's brother on the sidelines.

William Rondo was escorted out of the arena for violating guidelines from the NBA that prevented family from yelling at opposing players.

Update: Here’s what Rajon Rondo said transpired between his brother and Rondo.

Lakers guard Rajon Rondo says his brother, William, called Russell Westbrook “trash” and nothing more and gave him the “Damian Lillard” wave when the Rockets star asked what he said. Rondo said his bother didn’t say anything more and he is hopeful there will be no discipline.