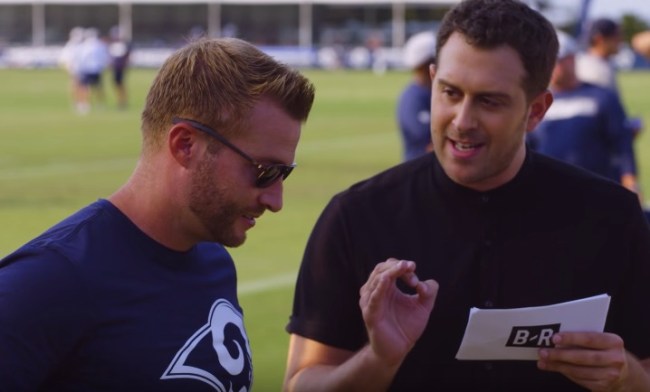 Los Angeles Rams head coach Sean McVay became the youngest head coach in NFL history when he was hired in 2017 at the age of 30. Prior to that, he was the offensive coordinator for the Washington Redskins for three years.

It’s easy to speculate on why an NFL team would choose a 30-year-old McVay over seasoned veterans in the league but when you see his mental acuity below things will begin to click. He’s got a freakish memory and can recall every play throughout his coaching career.

Since taking over as LA Rams head coach Sean McVay has pretty much been killing it. Sure, he went one-and-done in the playoffs last season but the Rams had a regular season record of 12-5 and McVay was named Coach of the Year by the Pro Football Writers of America.

Bleacher Report caught up with Rams head coach Sean McVay during practice and grilled him on random play calls throughout his career. They went back as far as Week 7 of the 2015 NFL season and Sean was still able to accurately remember the exact play. It’s insane.

I’ve included the video in every format that I could find it (Instagram, Twitter, and YouTube) for you to choose from. The YouTube video *should* start playing at the 5:15 mark just before the Sean McVay interview but just in case it doesn’t, that’s the point in the video you’ll want to jump ahead to.

Sean McVay’s grandfather was the head coach of the New York Giants from 1976 to 1978 (Sean was born in 1986) so it’s not like he just fell ass-backward into this field. He was raised in a football family and has been taught the game from his earliest days. But that doesn’t explain his steel trap of a memory.

The skeptic inside of me is wondering if this is what it appears to be. Did he really recall a play he called back in 2015 or did he just go through what he would’ve called based on the playbook and yardage against whatever team they were playing?

Commit This To Memory: Alcohol Makes You Forget? Nah. It Might Actually Improve Memory In Some Drinkers

Even if it’s the latter, if he’s just calling out whatever plays *he would’ve* called in that instance and it just happens to match up with whatever he actually did call it’s still just as impressive.

The 1-0 Rams take on the 0-1 Cardinals this weekend in the 4pm slate of games. The Rams go into that game as 13-point favorites as of this morning.