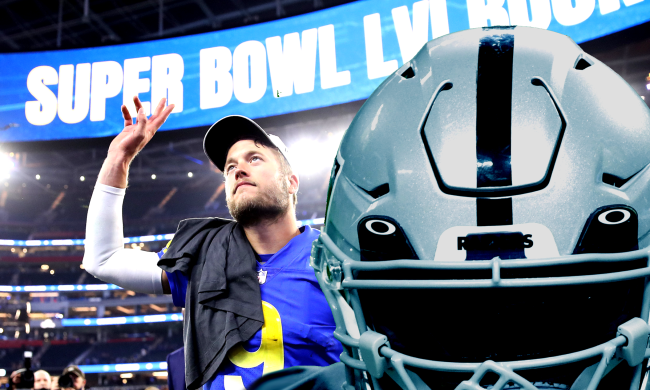 Eric Dickerson rushed for 7,245 yards in 65 games for the Los Angeles Rams in the mid 1980s. He set the single season rushing record of 2,105 yards for the Rams in 1984 after setting the rookie rushing record (1,808 yards) the year before. He was inducted into the Pro Football Hall of Fame in 1999. And he thinks he knows why Los Angeles, despite the team’s tremendous success, is still struggling to create diehard fans.

The Los Angeles Rams, in their second incarnation, have gone 59-38 and have now made it to two Super Bowls over the past six years.

There are NFL fans out there that would kill for their team to be that accomplished (including me, a Tennessee Titans fan).

However, earlier this week, the Rams held a pep rally as the team geared up for Super Bowl LVI. Unlike a similar rally held for the Bengals that drew 30,000 fans to Paul Brown Stadium, the Rams’ effort struggled to draw any supporters.

And the Rams will be playing in the Super Bowl IN LOS ANGELES!

Related: Absolutely Nobody Showed Up To The Los Angeles’ Rams Super Bowl Pep Rally On Monday

This week, while speaking to USA Today Sports, Eric Dickerson explained why he believes that is happening in L.A.

“The Rams were gone for 22 years,” he said. “That’s like all of a sudden, I’m gonna go outside and take the trash out and I come back 22 years later, ‘Hey, honey, I’m home!’ Where the hell you’ve been for 22 years? The Rams have not been here, so they have to expect a little pushback, a little drawback.

Fun Fact: The Raiders left Los Angeles the same year the Rams did

Apparently the Raiders’ 13 seasons in Los Angeles, which ended in 1995 when the team moved back to Oakland, is more important and memorable than the 49 years the Rams spent in the city before leaving in 1995. (Yes, Los Angeles, had not one, but two NFL teams for 13 years back in the day. Similar to today with the Chargers, only with fans.)

Dickerson did add that if the Rams win the Super Bowl on Sunday, as he predicts, things could change for the better.

Eric Dickerson threw some hilarious shade at the Bengals and Browns while making his Super Bowl pick today with @anezbitt. Hint: He likes the Rams. pic.twitter.com/sTVHoMc3Yj

NFL fans had all sorts of reactions to Dickerson’s take on the Rams’ current struggle to gain fans.

He’s all over the place w/ his takes…remember this from 2009?

“Eric Dickerson played for the Los Angeles Rams for five seasons (and the L.A. Raiders for one) -- but Dickerson says the NFL will never come back to L.A. because its fans are nothing but spoiled little children.”

Didn’t the Raiders leave LA the exact same year the Rams left LA? Perhaps LA just isn’t a football town. I grew up a big Baltimore Bullets fan, but at games when I’d look around the Civic Center I’d see a lot of empty seats. Baltimore wasn’t a basketball town.