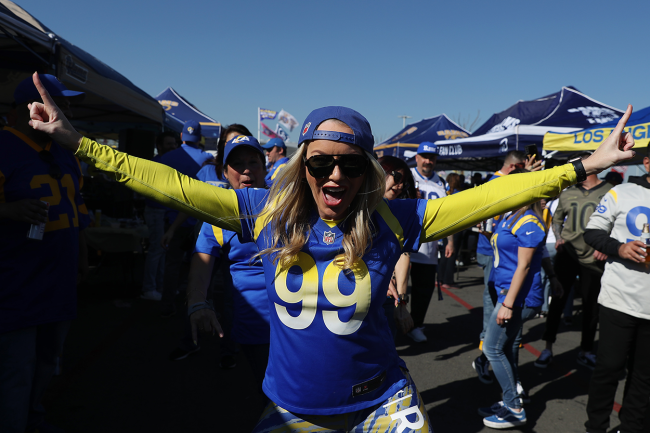 Los Angeles has long been said to be a bad sports town. Its fans don’t seem to care about their teams as much as other cities around the country and that was very much on display on Monday.

In less than a week, on Sunday, the Rams will play the Bengals in the Super Bowl. Although Cincinnati will technically be the designated home team, Los Angeles will be playing what is basically a home game.

– Playing in their home stadium.

– In their home locker room.

– Standing on their home sideline.

However, as we have seen before, that does not mean that the Rams faithful will be an overwhelming majority of the fans in the stands. When the 49ers played the NFC Championship at SoFi Stadium earlier in the postseason, it was a total takeover by San Francisco.

That likely will not be the case on Sunday, because Cincinnati to L.A. isn’t as easy of a commute, but if Monday is any indication, Rams fans don’t seem to care as much as Bengals fans. Both teams held a pep rally before the week and its surrounding festivities really began and absolutely nobody showed up in Los Angeles.

Here was the scene in Cincinnati, where 30,000 fans packed into Paul Brown Stadium:

30,000 tickets were distributed at the @Bengals rally tonight 🔥 #RuleItAll

When tight end C.J. Uzomah ripped off his leg brace to pump up the crowd, they went bonkers.

Meanwhile, the Rams rally saw maybe 1/10th of that attendance.

Maybe. L.A.’s rally was held at a local high school and hardly anybody was there and they were not loud at all.

Rams rally and they are about to arrive to the thousands of fans.
It feels so high school in the best way.
ESPN 2 now. pic.twitter.com/QA34wEepYP

The team’s official twitter account posted a video of player arrivals. The video did not show a single crowd shot, because it would have been embarrassing, and did not have audio, because surely it was not very loud.