Bengals TE C.J. Uzomah Rips Off Leg Brace At Super Bowl Pep Rally, Will Make You Run Through A Wall 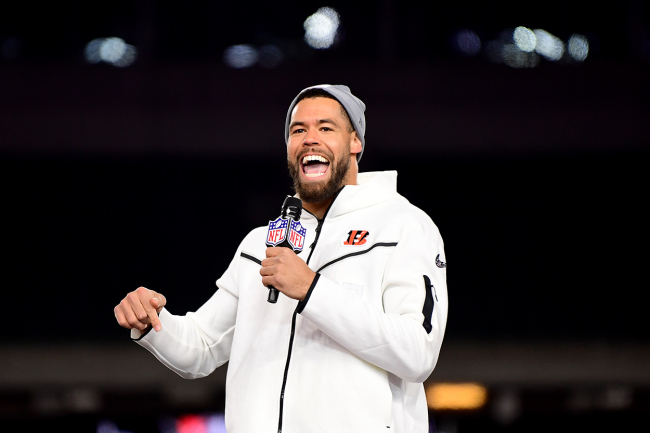 Bengals tight end C.J. Uzomah suffered a sprained MCL in the first half of the AFC Championship game against the Chiefs, but that isn’t holding him down. The 29-year-old said on Monday that he will be playing in the Super Bowl and announced his decision in electric fashion.

Uzomah did not practice last week and the team did not practice fully on Monday before flying to L.A. on Tuesday. Prior to boarding the plane to head out West, Cincinnati held a fan rally at Paul Brown Stadium.

During the rally, Uzomah took the mic last. Before making his speech, he proceeded to rip off his knee brace in dramatic fashion, threw it into the air and flexed. It was an incredible moment that sent the crowd into a frenzy.

Take a look, but be careful, because it will make you want to run through a wall:

.@cj_uzomah really ripped his leg brace off to get the crowd hyped at the @Bengals rally. 😂 pic.twitter.com/N7OjoOxSpb

Uzomah also spoke with reporters on Monday about his knee. No matter how much pain he might be in, he is not missing the Super Bowl.

It is unclear whether the veteran tight end will really be healthy enough to give it a go, but it certainly seems like he is doing everything he can to be on the field. A player like Uzomah is impossible to root against.

If you can’t get excited about knee brace stunt on Monday, you don’t have a pulse.