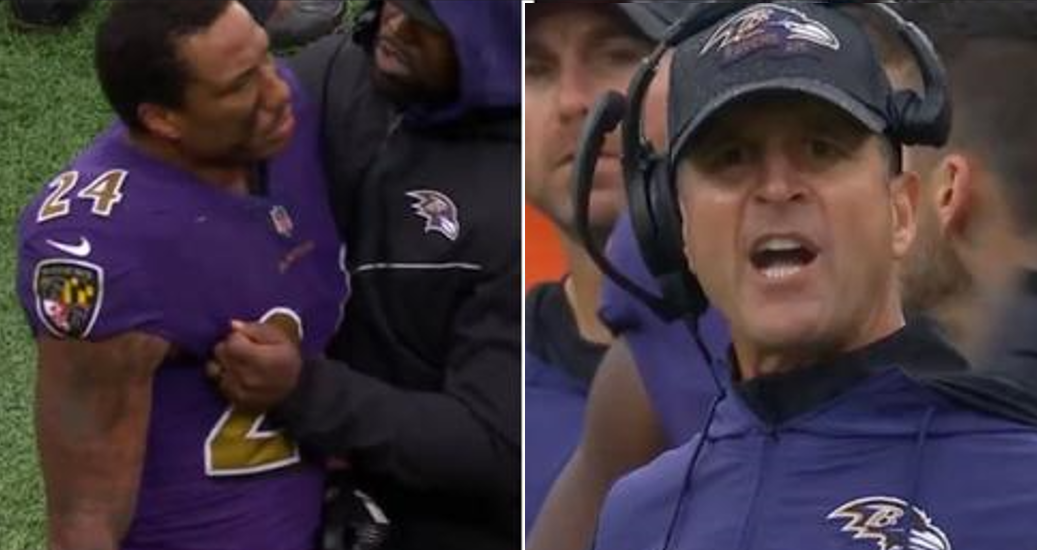 Ravens head coach John Harbaugh is speaking out regarding his heated confrontation with Marcus Peters on Sunday.

During the end of the Ravens-Bills game, Peters and Harbaugh were seen getting heated with each other.

Things got so bad that Peters had to be held from going at Harbaugh.

Marcus Peters is screaming in frustration as he leaves the field. . Peters is trying to get in Harbaugh's face and they just got separated. Peters threw his helmet.

Marcus Peters and HC John Harbaugh exchanged some words on the sideline before Buffalo's game-winning FG. CBS showed a small part of it.pic.twitter.com/FgDLvvPSk3

After the game, Harbaugh said the confrontation was no big deal and that “emotions were running high” at the moment.

Moments before Bills kicker Tyler Bass kicked a game-winning field goal to beat the Ravens on Sunday, Ravens head coach John Harbaugh and cornerback Marcus Peters could be seen screaming at each other on the sideline.

“Emotions run high. We’re on the same page,” Harbaugh said, via WGR 550. “We’ve got a great relationship, we’ve got an honest relationship. I love him, hope he still loves me, we’ll see.”

The Ravens were up 20-3 at one point in Sunday’s game, so it’s not hard to understand why things got heated as the collapse neared its conclusion.

Here’s video of Harbaugh talking about the confrontation with Peters.

Harbaugh also was asked about Marcus Peters being visibly upset — #Ravens HC said he loves Peters, and joked: Hopefully, he still loves me too pic.twitter.com/Qlu0iDd0qk