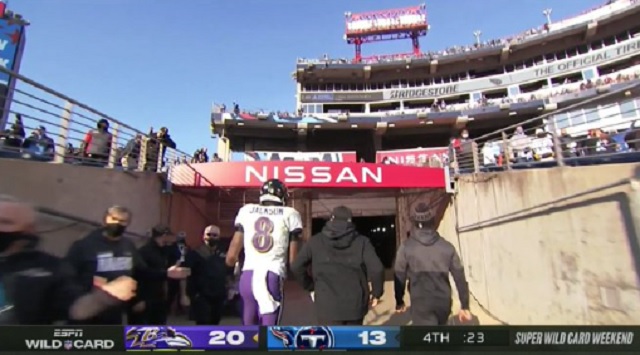 The Ravens-Titans rivalry is alive and well.

During the game, Ravens players stomped all over the Titans logo after a crucial Marcus Peters interception late in the fourth quarter.

After running down the clock to end the game, Lamar Jackson ran off the field with 23 seconds left on the clock to avoid shaking hands with Titans players.

Lamar ran for the locker room with time still on the clock. pic.twitter.com/UuUb952Lya

No handshakes from Lamar….anyone who downplayed this rivalry and said this was not personal for him after seeing that and listening to his post game interview was not accurate….wow.

After the game, Jackson explained why he didn’t shake hands with the “disrespectful’ Titans.

Lamar Jackson: "We didn't see what went on before the game the last time. [Later we saw] They were standing on our logo and getting into it with our coach. That was disrespectful bc we treat all our opponents with respect. … There wasn't any reason for us to shake hands."