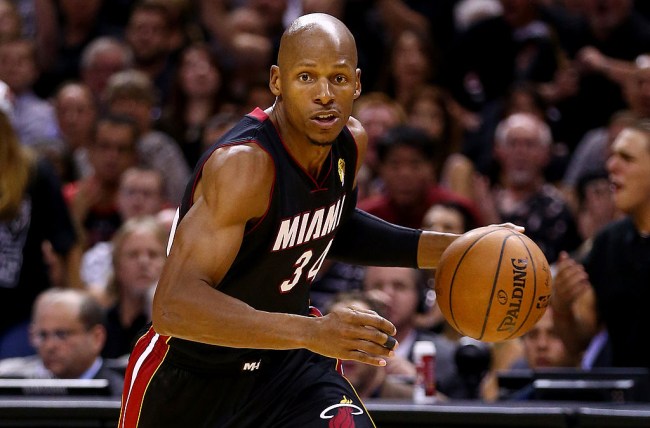 Ray Allen’s legacy in Boston is complicated, to put it lightly. During his five seasons as a Celtic (three of which he was an All-Star), Ray helped a perpetually meddling Boston team win it’s first championship in over two decades. But, during the 2012 season, the aging Celtics were ousted in a heartbreaking Game 7 of the Eastern Conference Finals by a fresh LeBron James-led Miami Heat squad.

Given the bitter rivalry and perceived hatred the two teams had for one another, Ray leaving to for Miami that summer was like Kelly Kapowski leaving Zach Morris to bang the top wrestler from Valley. The city did not try to hide their disdain for a dude who took a $3,5 million pay cut to join the sworn enemy. When the Celtics and Heat met on opening night of the 2012-13 season, Garnett said he “lost” Allen’s phone number. That same night “Judas Shuttlesworth” t-shirts were selling like hot cakes outside the TD Garden.

The most bitterly acrononious relationship in the entire saga was that between Ray Allen and Rajon Rondo. There was speculation that the two hated each other dating back to 2009 rumors swirled that the two guards would be shipped out to Phoenix for Amare Stoudemire, Leandro Barbosa and the 14th overall pick in the 2010 draft. Allen said that, at the time, Ainge and Rivers ‘didn’t get along’ with Rondo so Ray called him to tell him to straighten up. Rondo, who’s stubborn to a fault as it is, didn’t take to kindly to this, and this snub laid the groundwork for a tumultuous relationship with a less than ceremonious ending.

This strife between that Celtics team and Ray is alive and kicking, evident in a reunion that included host Kevin Garnett, Paul Pierce, Glen Davis, Kendrick Perkins and Rajon Rondo on Monday’s Area 21 on TNT. Ray was noticeably missing.

The group candidly talked about their collective problem with Ray, in that it wasn’t necessarily what he did, but how he did it.

“It was more than basketball for us… It felt like a sour breakup.”

Garnett explained why Allen was not included in the reunion:

“People don’t understand that this is real life for us. The situation with Ray is very sensitive. I think when we all talked about doing this reunion tour, we was talking about guys that we consider loyal, part of this group. Just being honest — my two cent, man. When Ray decided to go to the Heat, I felt like he moved on. He went to pursue another ring. He got another ring — shout to him. And that’s it … It was all Celtics invited to this.”

Throughout the entire session, Rondo, the man with the most to say, was noticeably silent.

Allen shot back on Facebook today with a cryptic jab at Rondo and his former teammates: 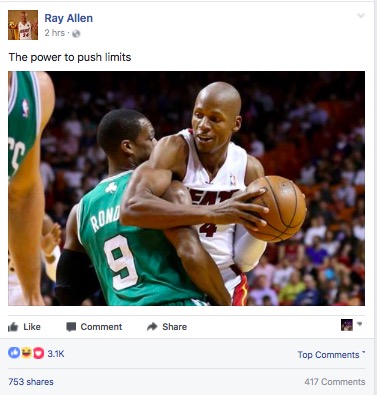 I guess the phrase ‘time heals all’ is a complete load of shit.