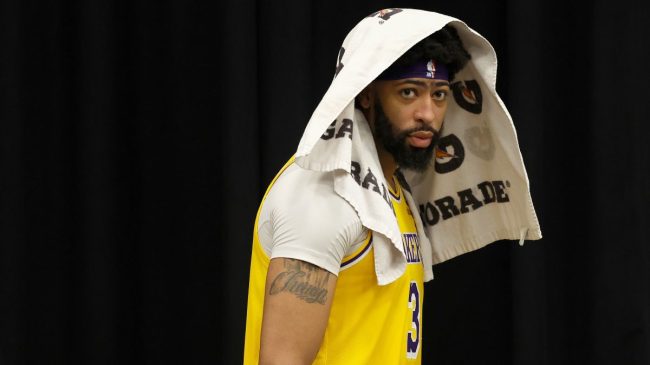 A video of Anthony Davis is making its way around social media Sunday morning and it’s proving worrisome for Laker fans.

The star forward admits that he hasn’t shot a basketball since the end of the 2021-22 campaign. April 5th to be exact.

Los Angeles’s season actually ended on April 10th, but Davis did not participate in the team’s last three contests. His last performance came on the fifth in a loss to the Suns. Davis scored 21 points, but apparently, he hasn’t picked up a ball since.

Davis has caught some flak over the last few seasons for not being able to stay in the lineup. Injuries have led to the big man playing in just 76 games over the last two years. This, after helping lead the Lakers to an NBA championship in 2020.

With Davis having missed so much time over the last two seasons, combined with the fact that the team just missed the playoffs, fans are worried about the star’s lack of practice time this offseason.

Take a look at the social media reaction below.

Many are saying that the Lakers should consider trading Davis away despite his talent on the court.

It’s time for the @Lakers to trade his ass. I don’t care how “talented” Anthony Davis is. Such a terrible example being set for the rest of the team by one of their so-called “leaders.” 🤦🏻‍♂️ Get his ass out of LA!! https://t.co/kzUEp75aa0

Others are wondering what LeBron James is thinking about AD’s time off, and how it could affect his future in Los Angeles.

Anthony Davis ain’t shot a ball since April 5th. It was a good run @KingJames

Of course, the new Lakers coaching staff could have something to say about this admission as they try to get LA headed back in the right direction.

darvin ham & rasheed wallace waking anthony davis up at 5am daily to get shots up after hearing he hasn’t shot a basketball since april 5th pic.twitter.com/3W271J1FO5

One key in getting the Lakers back to the playoffs will be Davis’s health and performance on the floor.