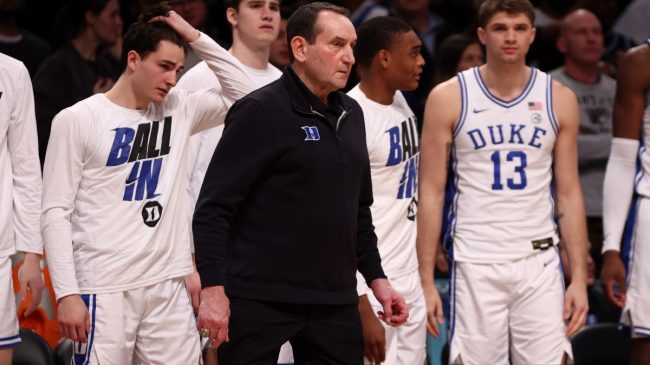 Duke is headed to the Sweet Sixteen!

The Blue Devils knocked off Michigan State in the round of 32 to keep their season alive in Coach K’s final stint on the sidelines.

The win gives Mike Krzyzewski his 26th career trip to the second weekend of March Madness, a ridiculous number considering his 42 seasons in Durham. He’ll try to keep the dream season alive next week as he looks to close out his career with a national championship.

The game versus the Spartans was highly anticipated, and for good reason.

Michigan State and Duke represent two of college basketball’s blue blood programs. Each team boast a future Hall of Famer at head coach, with Tom Izzo and Krzyzewski being very familiar with one another.

This matchup marked the 16th and final meeting between the two legendary coaches, and this win now gives Coach K a career 13-3 advantage over his counterpart. That includes a 4-2 record in NCAA Tournament games.

The Blue Devils led the majority of this game, though the Spartans never let that lead get to double digits. Michigan State trailed by six around the nine-minute mark, but they used a 13-2 run to build a five-point lead over the next four minutes.

That’s when Duke turned up the heat defensively.

The Blue Devils held Sparty to just six points over the final five minutes of play, eventually leaving with an 85-76 win. The come-from-behind win had folks on social media talking.

This was a huge win for the Duke program. Not only does it keep their season alive, it continues Coach K’s last ride in Durham.

He’s trying to go out a champion and his players are doing everything they can to make that happen.

The comeback win over a formidable Michigan State team caused quite the reaction on Twitter.

I've seen a lot of Duke comebacks over the years, especially in this tourney. That one was an all timer. Down five with Griffin on the bench, retirement beckoning. Young Devils really grew up today. Survive and advance!

Duke v MSU is stressing me out and I’m not even a fan.

Amazing Coach K & @DukeMBB advance to the Sweet 16 as they survive vs tenacious @MSU_Basketball The unbelievable career of the GOAT to ever coach in college rolls on. By the way today was Coach K’s 1200 th Win ..No one will ever catch that all time record! pic.twitter.com/vvMINZdvF4

Amazing game. Great performances by both teams. Let’s go Duke! Hey @Money23Green I will send you my shipping address for the bottle of DRC 🍷

No.2 seeded Duke knocks off Michigan St. to secure their spot in the Sweet 16 👏#MarchMadness | #HereComesDuke pic.twitter.com/8d04Ltl4VG

“I’m really proud to be your coach. It all had to do with heart.” 🥺

With the win, Duke advances to play Texas Tech in the Sweet Sixteen.