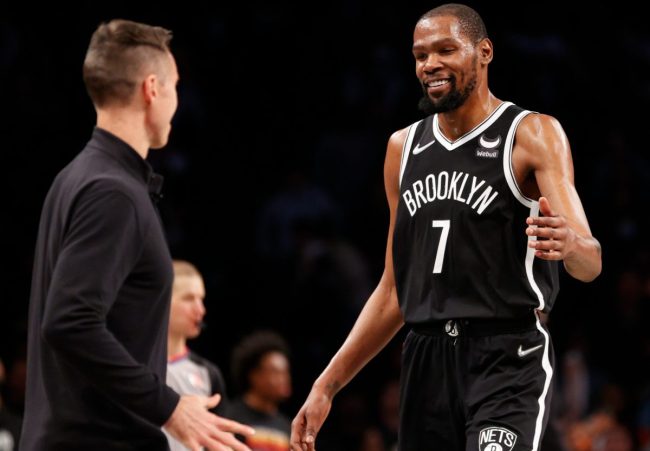 Things have grown rocky between Kevin Durant and the Nets’ leadership. It appears that KD is saying it’s either him or head coach Steve Nash.

It was reported Monday afternoon that Durant was giving the organization an ultimatum. They will need to either choose between their superstar player or their current head coach and GM.

This coming in an offseason full of drama for the Brooklyn franchise.

First, the team dealt with the uncertainty surrounding guard Kyrie Irving. While they eventually got him to stay in New York, it hasn’t been quite as easy to convince Durant.

The ultimatum itself is mind-boggling, but what makes the situation even more head-scratching is the fact that Durant had a lot to do with getting Steve Nash to Brooklyn in the first place.

In the team’s most recent head coaching search, the Nets tried to find someone that would mesh well with Durant following the fallout seen in his time with Golden State. Nash was the guy, and KD praised the hire when it was announced.

Here’s what Durant had to say about Nash as a head coach in September of 2020:

“His insight for the game, his communication, how he communicates the game of basketball is definitely going to help me as a player develop and it’s going to help the rest of the team… I’m looking forward to this man.”

He was also asked about whether he believed Nash was the right man for the job as early as this past April.

“C’mon man. Yeah. Steve’s been dealt a crazy hand the last two years. He had to deal with so much stuff as a first-time coach… I’m proud of how he focused, and his passion for us. We’ll all continue to keep developing over the Summer and see what happens.”

Fans have been quick to react to the recent news on social media.

Kevin Durant wanting Steve Nash gone after picking him to be the Nets head coach pic.twitter.com/tMRDzCpACz

Steve Nash seeing KD call for him to be fired after KD asked for him to be the coach in the first place pic.twitter.com/ozkiJgXvF4

how KD did Steve Nash pic.twitter.com/I9TmxUQt2W

Many believe the Nets will choose Nash over Durant.

Kevin Durant when the Nets choose Steve Nash over him pic.twitter.com/9djZCL86rv