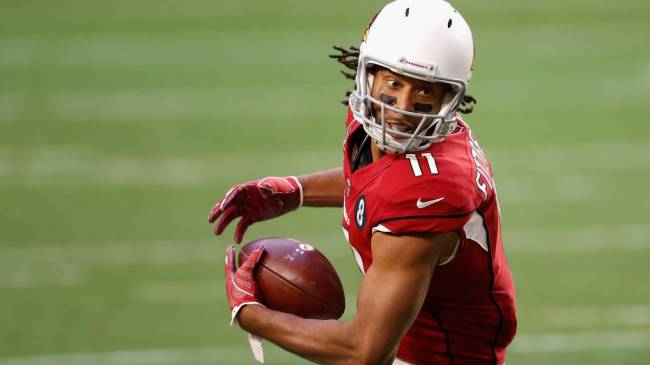 Larry Fitzgerald appears to be done playing in the NFL after announcing on social media that he’d be joining the ‘Monday Night Countdown’ team with ESPN.

The shocking news seemingly puts an end to a 17-year career for the future Hall of Famer. Fitzgerald ranks second in NFL history behind Jerry Rice in both catches and receiving yards, while also holding top 10 mark in touchdown receptions. He played each of his 17 professional seasons in Arizona, making one Super Bowl appearance.

The announcement seems to signal the end of his playing days, though he never officially announced his retirement to the public. Fitzgerald did not play last season, so many could begin to see the writing on the wall.

Always humble, the pass catcher’s quiet move from the football field to the broadcast booth is fitting. Still, many fans were surprised upon hearing his ESPN announcement.

When Fitzgerald made the ‘Monday Night Football’ announcement, many wondered the same exact thing. Did he ever officially retire from the NFL?

We’ve seen others make this move. Most notably, Richard Sherman announced his intent to join the Amazon NFL booth for Thursday night broadcasts though he has yet to announce retirement, either.

Sherman says he will consider a return to the NFL if he gets a call later in the year, but we’re not quite sure what Fitzgerald’s plans are. With that uncertainty surrounding his future, many responded by asking the same question.

One fan said, “Still not retired though.”

still not retired though 🙂

Another commented, “Does this mean he’s retired?”

Does this mean he’s retired 🙁

This fan is wondering if he’ll return to the field later in the season, saying, “I see. So, you’ll be back in the locker room around November?”

I see. So you’ll be back in the locker room around November?

Take a look at this insane stat.

“If this means Larry Fitzgerald is officially retired from his playing career, the coolest Fitz stat remains: Fitz finished his 17-year career with more tackles (41) than drops (29).”

If this means Larry Fitzgerald is officially retired from his playing career, the coolest Fitz stat remains:

This seems like a great move for Fitzgerald, who’s always been a fan favorite amongst NFL fans. We’ll soon find out if this is his official retirement announcement or if he makes a return to football later in the year.