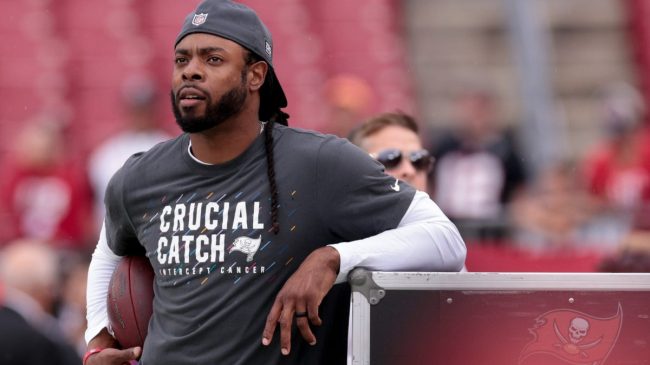 Richard Sherman can do it all.

The future Hall of Famer is set to join the Amazon Prime booth for the upcoming season. He plans to help out with pregame, halftime, and postgame coverage for Thursday Night Football broadcasts.

The set will get the knowledge of an 11-year NFL veteran who racked up 37 interceptions, five All-Pro seasons, and a Super Bowl victory. This, after a successful college career at Stanford.

Sherman was once a member of the famed “Legion of Boom” defense in Seattle that dominated the league in the 2010s. The Seahawks recorded the top scoring defense each season between 2012 and 2015 while finishing third in 2016.

Now, he’ll move that production to the booth in order to give a professional perspective to football viewers. He’ll also hope to liven up Thursday nights in the NFL, which he’s previously called “an absolute poopfest.”

But there’s a catch.

He’s doing all of this despite not yet being retired from the NFL.

Richard Sherman is still open to an NFL return

.@RSherman_25 joined our @wyche89 to announce that he will join the @NFLonPrime broadcasting team this fall, but isn't closing the door on his playing career just yet 👇 pic.twitter.com/Wpa95TUsQY

Sherman sat down with Steve Wyche to announce the Amazon Prime news, but he also left the door open for a return to the NFL.

“I’m still leaving that door open as long as I can. I’m obviously going to keep training and staying in shape, but you’ve got to take the opportunities when they’re there, and this is an amazing opportunity with Amazon so I couldn’t pass it up.

“But I’m going to leave that door open. If somebody wants to call late December, I’m happy to help.”

Most were supportive of the new gig, and they’re excited to see Sherman make the move to the broadcast team.

Amazon is putting their unlimited money to good use so far on TNF. I love the lineup they’ve built. https://t.co/XMa9VdCoJ6

Others though joked about his joining the booth while still not retiring from the league.

One @RSherman_25 going to announce his own signing in December 🤣 https://t.co/fhP7oXe15T

It should be interesting to see how it unfolds. Sherman’s never been one to bite his tongue which should provide some entertainment on Thursday nights. And if he does decide to take another shot at the NFL, we’ll see how he juggles the two gigs.