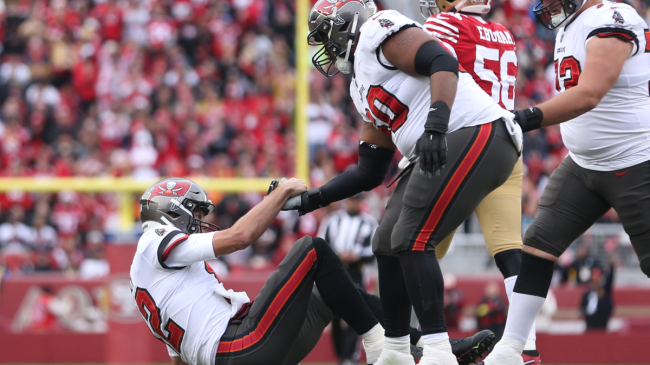 Tom Brady has yet again become a punching bag for NFL fans online. An embarrassing first half showing from the future Hall of Famer is the most recent bump in what’s been a turbulent 2022 season.

Brady and the Bucs trail a San Francisco team on its third quarterback of the season by five touchdowns. The 49ers defense is pitching a shutout while Brock Purdy has opened up a can of whoop a– in what’s become a 35-0 rout.

Purdy is just a rookie making just his fifth professional appearance, as well as his first start. Somehow, he’s been able to show up the greatest signal caller in the history of the league. Purdy threw a pair of first half touchdowns while Tom Brady recorded a pair of picks.

Tampa’s offense has looked out of sync and off rhythm for the majority of the contest, having nothing to show on the scoreboard. It’s been a constant theme for the Bucs this season, who are scoring just 18 points per game.

In this particular matchup, they’ve been able to shoot themselves in the foot in a variety of ways. We mentioned the two Tom Brady interceptions, but the Bucs have also missed a field goal and turned the ball over on downs. San Francisco has turned those mistakes into five touchdowns.

With Brady and Co. being embarrassed by the third-string led offense, fans are posting reactions social media.

One fan wrote, “Incredibly special for Bay Area-native Tom Brady to get to see both The Catch and Brock Purdy’s first start in person.” Another posted, “Pretty special for Tom Brady to be in attendance today to watch the greatest QB ever.”

If things continue, this could wind up being the worst loss in Tom Brady’s storied career. Tampa Bay is likely to fall to 6-7 after this game ends, though that will somehow still be good enough for first place in the NFC South.

Related: Tom Brady hints at coming back for another season