Eli Drinkwitz Is Trending For All The Wrong Reasons After CFB Writer Asks, ‘Which SEC Coach Would Win In A Fight?’ 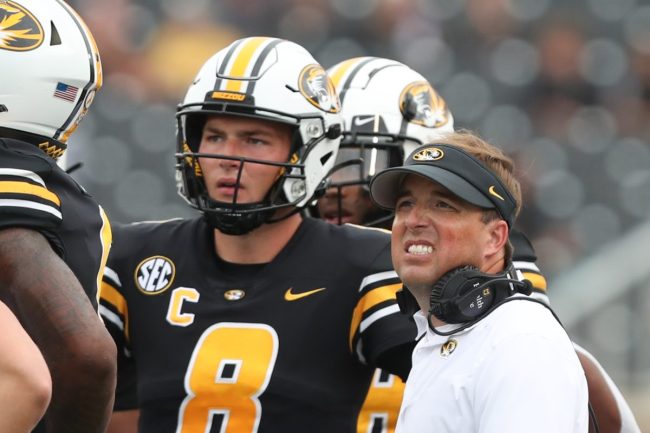 Southeastern Conference football writer Barrett Sallee is asking the most important question this offseason. It’s got nothing to do with standings, players, or championship odds.

It’s a question about toughness, strength, and the will to win.

With the preseason soon coming to an end, the 14 SEC head coaches will be battling it out on the gridiron. That led Sallee to list his rankings of, “Who would win in a fight” involving the conference leaders.

SEC coaches ranked by who would win in a fight:

Auburn’s Bryan Harsin topped the list while Mississippi State’s Mike Leach brought up the rear. College football fans were quick to weigh in with their thoughts, and the opinion was unkind to Missouri’s Eli Drinkwitz.

While many agreed with the group at the top (I’d probably put Pittman and Stoops a little higher), there was one overwhelmingly popular choice to put at No. 14.

Kiffin would tap out with a fake injury.
Any list where Drinkwitz isn’t last is questionable.

I am as big of fan as Drinkwitz as any, but I have to think he would be on the bottom 3 at best. pic.twitter.com/9NwKMQOWLp

Drinkwitz would lose to every coach in the NCAA

Brutal, but I can’t disagree.

While the head coach seems to have a mind for the offensive side of the ball, he comes off as a bit of a dork. Look no further than his appearance at SEC Media Days where he attempted to go toe-to-toe with Lane Kiffin’s shoe game.

Luckily, he shouldn’t have to fight any of his opponents on the sidelines this season. He will, however, need to improve Missouri’s standing in the SEC East. The Tigers haven’t posted a winning record since 2018.