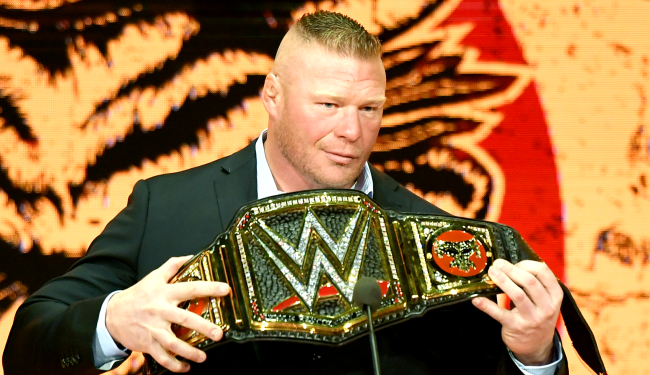 Mammoth human being Brock Lesnar hasn’t been seen in a WWE ring since losing the WWE Championship to Drew McIntyre at WrestleMania 36 back in March.

There have been rumors that Lesnar, who turned 44-years-old on Monday and is currently not under contract to the WWE, will make his return at the company’s annual SummerSlam pay-per-view next month, but nothing has been confirmed.

Lesnar’s former mouthpiece in the WWE Paul Heyman recently told SportsTalk 790. “If Brock Lesnar wanted to be back in WWE at this moment, at this particular time and place, he would be. Maybe, maybe he has been waiting for the live events, and maybe he’ll choose Houston to make that return… or maybe not, because Brock Lesnar is going to do whatever Brock Lesnar wants to do.”

What has been confirmed, however, is that Lesnar has been spending some of his time away from WWE joining up with The Bearded Butchers and growing out a sweetass new ponytail.

That’s right. The “Beast Incarnate” is rocking a ponytail.

YOUR EYES DO NOT DECEIVE YOU! BROCK HAS A PONYTAIL! pic.twitter.com/5pceChjAuy

Reactions on social media to Lesnar’s VERY different and new look were, of course, excellent. Especially those of diehard WWE fans who proceeded to basically lose their minds.

“The man could be wearing a dunce cap and would still look like he could murder you and bring you back to life just to murder you again,” one person wrote on Twitter.

“Brock Lesnar has turned into a character from Tekken and I couldn’t be happier about it,” wrote another.

Brock Lesnar bout to make his MMA return with a karate stance pic.twitter.com/mL2WpgQ8CD

He doesn’t look like the same guy who suplexed John cena 16 times at Summerslam. He’s changed

I dare you to tell him how it looks

So… will we see Brock Lesnar at WWE SummerSlam next month as many fan are hoping?

But… what exactly does Lesnar want to do? I guess we will just have to wait and see.