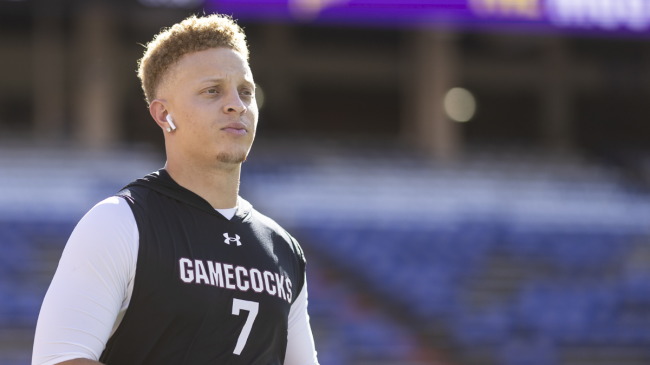 Spencer Rattler and the South Carolina Gamecocks pulled off the upset of the weekend on Saturday night, knocking off a top five team in front of a rabid crowd in Williams-Brice Stadium.

No. 5 Tennessee entered Columbia at 9-1 with slim College Football Playoff hopes still alive. Those hopes were quickly dashed as the Gamecocks piled on a season high 63 points in an emphatic win. The total was the most an unranked team has laid on a top five ranked opponent in over a century.

South Carolina scored so much that the production crew ran out of celebratory fireworks during the fourth quarter of play.

South Carolina scored so many points they ran out of fireworks 😅 pic.twitter.com/rawkIQXSxz

Making things worse for the Vols, the crushing blow came at the hands of one of the SEC’s worst offenses, statistically speaking. Murmurs in Columbia referenced a potential firing of offensive coordinator Marcus Satterfield at season’s end after the unit was shutout in a 38-6 loss against Florida a week ago. The Gamecocks’ lone score came on a fake punt.

Satterfield prayed to the football gods in hopes of an offensive turnaround. Those prayers were answered on Saturday.

The Gamecocks posted more than 600 yards of offense, with the passing attack taking full advantage of a weak Volunteer secondary. Spencer Rattler led the way with career highs in both yards and touchdown throws as his redemption tour in South Carolina officially began.

The former five-star passer got everyone involved, with five different players finding the endzone. Gamecock fans finally got to see the performance they’d hoped for when Rattler transferred earlier this year. And what a ride it’s been for the signal caller.

Everyone knows about the saga at Oklahoma, and his midseason benching for Caleb Williams. He started anew in Columbia in hopes of revamping his image as a potential Heisman candidate and first-round NFL prospect. That, unfortunately, hadn’t happened.

Rattler entered this matchup with Tennessee as the SEC’s lowest rated passer. He’d thrown eight scores and nine interceptions through 10 games under center. On Saturday, he nearly doubled that touchdown total, instantly becoming a hero.

As fans stormed the field to celebrate the big win, the quarterback was surrounded by the Gamecock Faithful in Williams-Brice Stadium. It was an absolutely electric scene.

This is the Spencer Rattler that Gamecock fans were promised

Rattler, himself, echoed that same sentiment after his historic outing.

“This game and the next one could change the narrative of the program forever.”

That next game comes on Saturday in what’s now become a huge rivalry matchup versus No. 9 Clemson. If Spencer Rattler and the Gamecock offense perform to their potential, they could end the College Football Playoff hopes of a second consecutive foe.