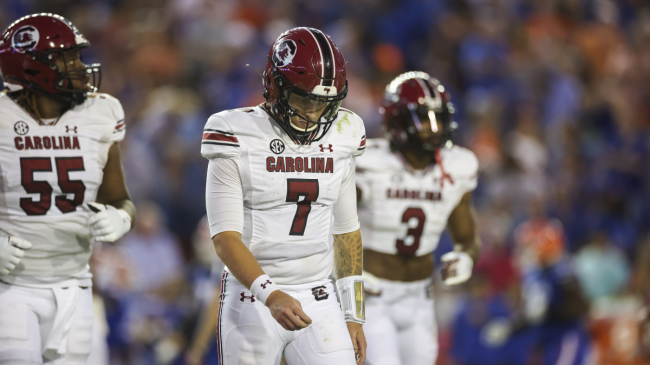 Things have quickly gone downhill in South Carolina. The Gamecocks football team, which started the year 5-2 and found its way into the top 25, has now lost two of three games and is staring down the barrel of a three-game losing streak to end the season. After getting shellacked by Florida last week, the Gamecocks face No. 5 Tennessee and No. 9 Clemson to close the schedule.

In that loss to the Gators, the Carolina offense was abysmal. They failed to put together a scoring drive, with the Gamecocks’ only touchdown coming on a fake punt before halftime. The result was a 38-6 beatdown, and should things not improve drastically in the coming weeks, it’s a phenomenon that could become familiar in Columbia.

Unfortunately for Gamecock fans, there’s little hope of a change. The offense has been an issue dating back to the 2021 season when coordinator Marcus Satterfield took over. Last year, South Carolina finished 104th in scoring, failing to reach the 30-point mark in eight of 10 matchups against Power Five opponents.

There was, however, a built-in excuse for the offense. Injuries caused the Gamecocks to use four different players under center, one of which began the year on the football team’s coaching staff and another that primarily played wide receiver. Somewhat miraculously, the team won seven games.

But things were supposed to change in 2022. The players had an extra year to learn Coach Satterfield’s playbook. Former five-star passer Spencer Rattler transferred in, along with a number of notable offensive weapons. The team scored 38 points in its bowl game, giving hope for the future.

But with different pieces in the lineup, the results have remained largely the same.

The Gamecocks rank 68th in scoring, though that number has been inflated by defensive and special teams play. We mentioned the fake punt that South Carolina scored on for its only six points last week. Well, they also rank second nationally in blocked kicks and have set the offense up with short fields consistently.

Look at a 30-24 win over Texas A&M where South Carolina was up 17-0 within the first five minutes thanks to a kick return score, a near pick-six, and a near scoop n’ score. Or a Kentucky win where an interception gave the offense a two-yard TD drive, essentially scoring a third of the team’s points. They also blocked a punt deep in opposing territory in that game.

Keep going? Why not? The Gamecocks scored half their points on blocked punts in a 35-14 win over Georgia State where the offense couldn’t muster much of anything against a Group of Five foe. Take away matchups with Vanderbilt, Charlotte, and South Carolina State where the team averaged 48 points a game, and the production looks putrid against anyone with a pulse.

In games where the defense/special teams don’t score (or come close), the Gamecocks football team typically loses. Head scratching play calls have led even players on the team to question the coaching staff publicly.

And did we mention the team ranks 129th out of 131 FBS teams in giveaways? They fumbled on back-to-back-to-back drives in that blowout loss last week.

But have no fear, an answer is near.

Satterfield took to the mic Wednesday to discuss the offensive issues, and he’s apparently down to his last option. Prayer.

The coach is using his inner Game of Thrones to will the unit to success. Take a listen to what he had to say in his most recent press conference.

whatever God our offense is praying to, it’s the wrong one 😂😂😂😂😂 pic.twitter.com/KiiISlFSfO

Satterfield plans to “honor the gods of ball security” to reverse the Gamecocks’ turnover woes. I guess it’s worth a shot as nothing else has worked over the last two seasons.

He’d better hope the football gods help him out, otherwise, his time atop the Iron Throne will be short lived.