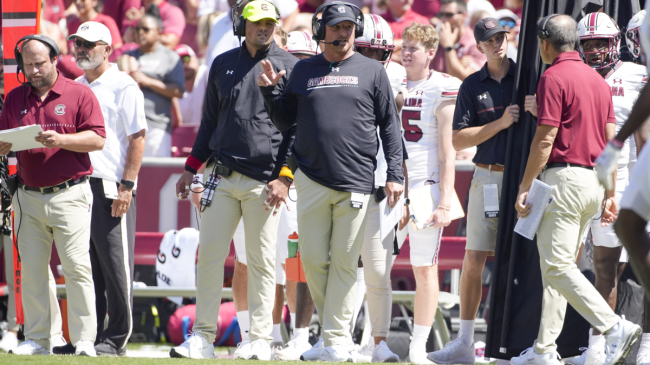 Things aren’t great in the capital city of South Carolina.

The hometown Gamecocks were throttled by the Georgia Bulldogs over the weekend, 48-7, which led to an early exit by the majority of viewers in Williams-Brice Stadium.

A season that began with hope following a number of key additions in the transfer portal has now become upsetting following a 1-2 start.

What’s worse, it seems that many of the same issues that haunted the Gamecocks last year are beginning to reappear in 2022 despite having seemingly upgraded at many of the skill positions.

In a win over Georgia State in Week 1, South Carolina scored just 12 points in the first half. It took a pair of blocked punts in the second half of action to give the Gamecocks a bit of breathing room over the SunBelt foe. In Game 2 against Arkansas, the Gamecocks fell behind 21-3, having to play from behind in a 44-30 defeat.

And then, there was last week, where South Carolina fell behind 24-0 in the first half and only gained 306 yards of offense. Much of that production came in garbage time against the second-string defense. The 41-point margin was the largest in history of the 70-game series.

Now, I’ve watched some bad South Carolina football in my lifetime. Many of my first college football memories center around a 21-game losing streak over the 1998-99 seasons (Why I didn’t get out then, I don’t know).

Typically, especially in this series, the Gamecocks show a little more fight. But with the team having lost by four touchdowns each of the last two seasons to the Bulldogs, many are calling for a change on the coaching staff.

Offensive coordinator Marcus Satterfield got a pass last season with the unit having to rely on four different quarterbacks, which included an FCS transfer, a wide receiver, and a grad assistant that they pulled off the coaching staff.

But now, there is a former five-star passer at the helm. The pass catchers and running backs have improved. The entire offensive line is back. Yet, the results remain the same.

The Satterfield hire was questioned by many during the offseason of Shane Beamer’s first year as head coach. Those cries have only gotten louder with the poor play on offense.

Marcus Satterfield killed the student section. Ticks me off all them left. But why would they stay, no hope at all in this offense. None. We had actual chances and pissed away every opportunity.

i’ve been the biggest “wait and see” person on marcus satterfield, but after that third down call i am officially off that train

The play calling has been questioned, the production has been minimal, and many are ready for the experiment to end. Now, there even appear to be some South Carolina players calling out their OC.

Josh Vann and Darius Rush, a pair of seniors on the Gamecocks’ roster, were heard calling out Marcus Satterfield for some questionable decision making earlier in the year.

The two have a podcast called Completely Cocky, and this week they talked about some interesting coaching calls. Vann, who plays wide receiver, spoke on a particular instance where Satterfield called a play on a critical third-down which the offense hadn’t gone over in nearly a month.

“It was one time, not to bash the coaching, but it was like third down, and we called a play that we hadn’t been over in three weeks. Mind you, as a player you’ve got to know the whole playbook… but at the same time, we didn’t go over it… You can’t expect, in the heat of the moment, for somebody to recognize on the fly.”

It makes sense. Yes, you should know everything in the playbook, but at the same time, schemes and attacks change week to week. If the play wasn’t part of that week’s game plan, why throw it out there in a critical moment of the game?

It only added fuel to the ‘Fire Marcus Satterfield’ fire.

This fan posted a clip of the video along with a caption that read, “Here’s an excerpt from Darius Rush and Josh Vann’s podcast talking about a 3rd down-play call from Marcus Satterfield during the Arkansas game. Vann states Satterfield called a play the offense hadn’t practiced in weeks on a crucial down. Things like this can’t happen.”

If things continue to stay stagnant on offense in Columbia, Satterfield’s seat will only become hotter.