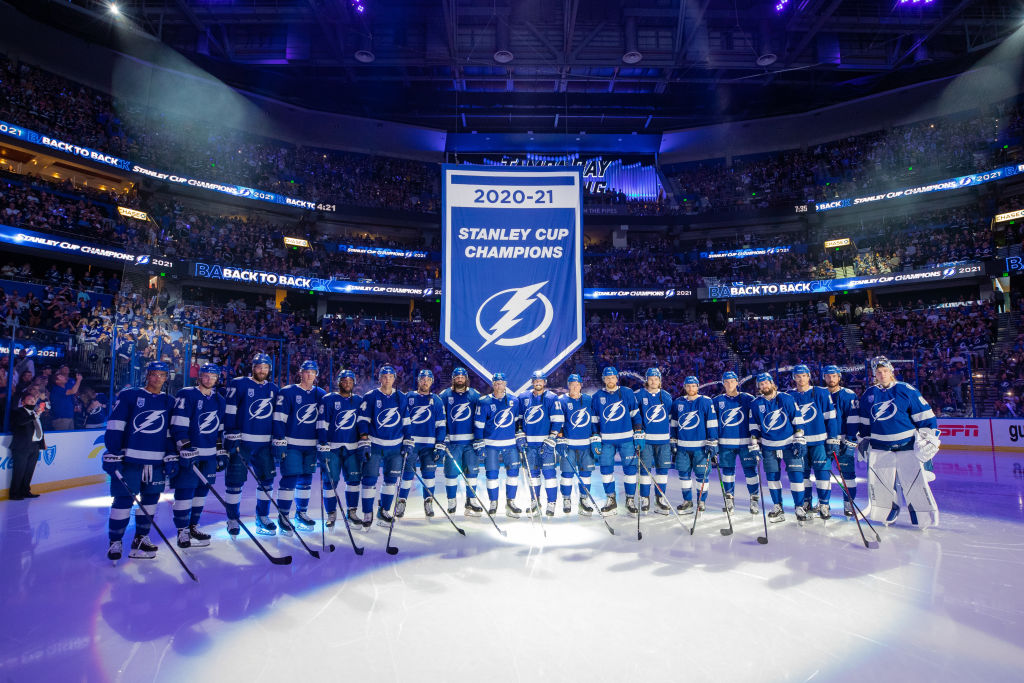 The Tampa Bay Lightning won back-to-back Stanley Cups and on Thursday they debuted the team’s new Stanley Cup championship rings. These are the team’s third Stanley Cup rings and the best ones yet, in my humble opinion.

These championship rings feature 338 total diamonds, 14-karat white gold, 52 sapphires, and the gemstones total an astounding 31.67 carats. The top of the ring has the most jewels with 45 baguette diamonds surrounding the Lightning logo, 30 custom sapphires making up the Bolt logo itself, 11 baguette sapphires underneath the “Stanley Cup Champions” word, and 56 diamonds on the top in total.

The best detail by far of Tampa Bay’s new championship rings is a “#1 BS” tribute to Nikita Kucherov’s now-infamous “number one bulls**t” rant about how Andrei Vasilevskiy got snubbed by not winning the Vezina Trophy. Vasy was the best goalie in the NHL last season AND the season before.

He’s unfairly punished by voters for playing on a great team and keeps being named a finalist but isn’t repeatedly winning the NHL’s award for the league’s best goalie. Nikita Kucherov referred to this as “number one bulls**t” in a press conference and the Tampa Bay Lightning put it on their championship ring!

Here’s a look at the new Tampa Bay Lightning championship rings with fan reactions to the “#1 BS’ below as well:

Some notes on the EPIC back-to-back Stanley Cup Championship rings:

– Last day of school: for the core team being together
– Process over outcome: I can’t tell you how many times Cooper says this in press conferences

But my favorite part is the #1 BS

Check☝🏽
Check ✌🏽
How do you do? #GoBolts pic.twitter.com/Gkbt5Rm5B6

And here are the ‘number one bulls**t’ reactions:

The @TBLightning really put #1 BS in their rings 🤣🤣 pic.twitter.com/zMqA6pMYy9

There's a reference to shutting out every trash team they played

All these sour responses is hilarious man. Your team names are literally on the ring. Forever.

I’m a Tampa Bay Lightning fan so I obviously love these rings a whole lot more than fans of Montreal, the Islanders, Carolina, and the Panthers but HEY, you made our championship rings so that’s something you can tell your kids about one day, right? I was at our Cup-clinching game, by the way. Best money I’ve ever spent on tickets. If you ever get the chance to see your team win a championship then seize that opportunity.

My coach is 2-fur-2 in the last 2. HBU #GoBolts pic.twitter.com/vUFb0Vn7Jn

Now it’s time to run it back and win another one.