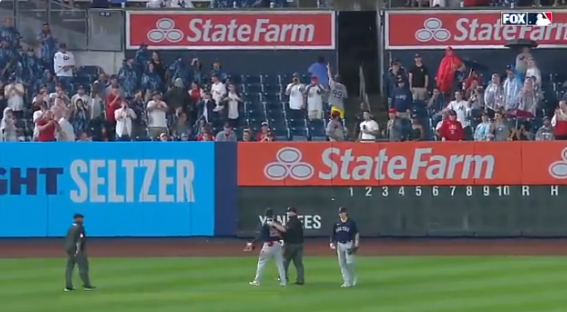 In the sixth inning, the Red Sox-Yankees game was briefly delayed after a Yankees fan threw a ball at Verdugo in the outfield. An angry Verdugo exchanged words with the fan who was escorted out of the stadium by security.

Developing situation with the Red Sox at Yankee Stadium in New York, after an object appeared to be thrown at LF Alex Verdugo. #RedSox players now walking off field.

It has been pouring in the Bronx all evening.

A fan threw a ball at Alex Verdugo… pic.twitter.com/V8F55GE4fM

Verdugo had been going back and forth with fans here last month. That was all verbal. Looks like they ID’d and escorted out the fan who threw the ball at Verdugo this time. Play resumes. https://t.co/fao15h9IJN