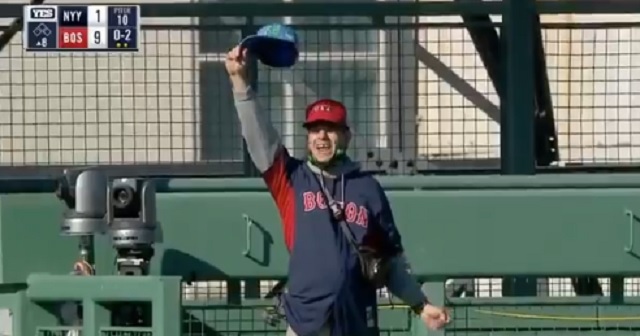 A bizarre scene played out in Fenway park during Sunday’s Yankees-Red Sox game.

In the middle of the game, a Red Sox fan somehow snuck into the game and started throwing stuff on the field.

Who is this guy and how did he get into Fenway Park? pic.twitter.com/rvYFcJPaAj

Looks like he might’ve climbed up the outside of the Green Monster and is now standing in the camera well above center field shouting down to the field. pic.twitter.com/iYCPZdnlCq

The police eventually were able to get to the man and he was escorted out of Fenway park.

After several minutes of the fan standing on the camera well, even doing pushups at one point lol, police officers escort him off the Green Monster.

Security got him. Looks like he will not be joining the Red Sox bullpen. Jerry Remy was not a fan. pic.twitter.com/c4NVy9U8TR