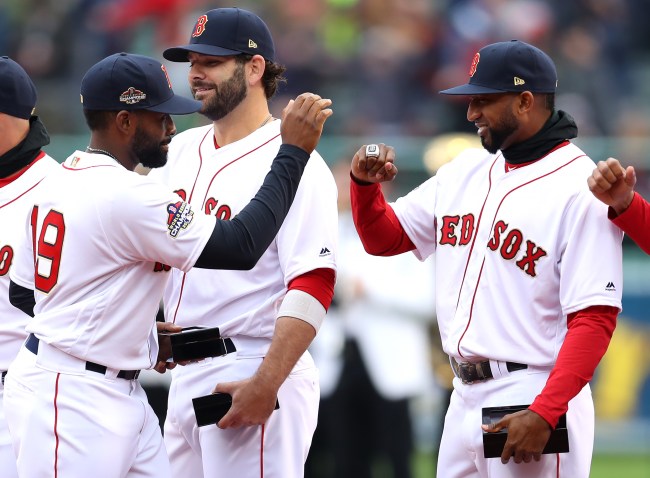 It’s been a busy day at Fenway Park, as the Boston Red Sox kicked off their home opener on Tuesday by raising a new banner while also honoring the Patriots Super Bowl victory in February.

The Sox and Pats couldn’t even fit all their hardware in one photo. This is getting cartoonish…

What if I told you none of these trophies are old enough to drink (and there are some missing) pic.twitter.com/wcqO4RmERH

In any event, the Red Sox received their fourth World Series ring in the 2000s after waiting 86 years to break through, and the bling is spectacular.

The rings are crafted with 14-karat white gold and boasts 185 stones, representative of the 162 regular season games, plus 14 postseason games, and nine World Series titles won by the Red Sox in the team’s history. The rings feature 15 carats of gems, 4.5 carats of diamonds, 6.5 carats of sapphires, and 4.0 carats of rubies. On the inside of the ring, the player’s signature and nickname is engraved as well as the date of World Series victory (10/28/18) and the phrase “Damage Done,” alluding to the Sox postseason rallying cry of “Do Damage.”

Circulating the ring is 128 diamonds in two rows, signifying the 119 franchise-record wins coupled with the nine World Series titles held by the Red Sox. Another clever feature of the bling is the 100 total weathered bricks that make up the background of each side panel to celebrate the centennial of the 1918 World Series title.

World Series champs has a nice ring to it. 💍 pic.twitter.com/vpUhDwEK8D

All in the details. 💍 pic.twitter.com/lpL6VRD2b9

Where does this ring rank aesthetically in the prettiest World Series rings of all-time?

The 2017 Houston Astros rings were sex-infused.

Congratulations again to the #Houston @astros for winning the 2017 World Series! Click the link in our bio to learn how the team and @Jostens chronicled their historic journey through their just-released #championship ring.#ring #diamonds #champions #champs #baseball #MLB #ball pic.twitter.com/CKVmES2PtU