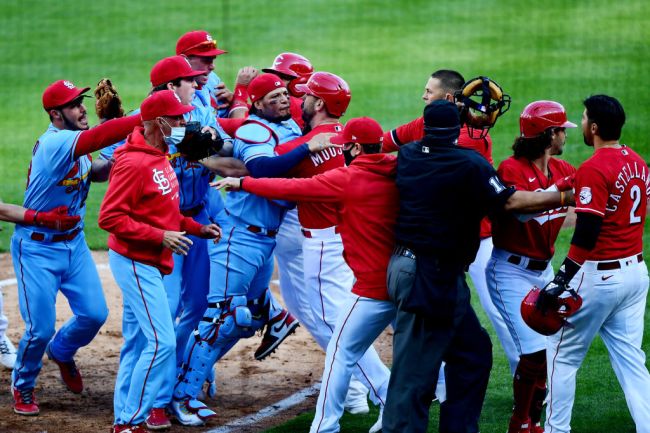 We have our first brawl of the 2021 MLB season and it came in bench-clearing fashion! The Opening Day series between Cincinnati and Saint Louis got testy in only the 13th inning of the year. Nick Castellanos stepped up to the plate in the bottom of the fourth inning and was not happy about getting hit by a pitch. Before he made the jog down to first base, he exchanged words with Cardinals catcher Yadier Molina, walked over to the ball that clipped him and held it up at pitcher Jake Woodford, asking him if he wanted it back. Castellanos then tossed it aside and the drama began.

Nick Castellanos didn't take too kindly to getting plunked. 👀 pic.twitter.com/jwqf7OXF7E

Two batters later, the bases were loaded for the Reds with two outs and Woodford sent one sailing to the backstop, allowing Castellanos to score from third. Molina chased down the passed ball and flipped it to Woodford, but it was too late and Cincy put a run on the board. After he touched the plate, Castellanos hopped up and talked his talk directly in the face of the opposing pitcher. Molina was not having it and ran over to shove Castellanos, at which point both of the benches cleared.

The Reds' and Cardinals' dugouts have emptied after Nick Castellanos scores on a wild pitch. pic.twitter.com/M8sSctUjbo

Nick Castellanos and Yadier Molina jawing at one another following the score. #Reds #STLCards pic.twitter.com/9Gpnw3CQBD

Castellanos was escorted near the Reds dugout by home-plate umpire Tony Randazzo and then ejected for the first time in his career. Things settled down momentarily and the teams began to disperse a member of the Cardinals bullpen reignited the flame in the outfield. Both teams took off beyond second base and the kerfuffle continued.

After their initial encounter, tempers flare further between the Reds and Cardinals in the outfield. pic.twitter.com/Bbvw8fT26K

Meanwhile, Molina gave Castellanos a piece of his mind back at the plate. The 38-year-old catcher did not appreciate his pitcher being disrespected like that and was ready to go to war on his teammate’s behalf. Yadi did his job.

This is not the first time that we’ve seen bad blood between the two teams, dating back to one of the craziest brawls in MLB history in 2010. Molina was at the forefront of that instance as well.

Saturday’s skirmish was not nearly as bad, and only Castellanos was sent off. It’s so good to have baseball back.