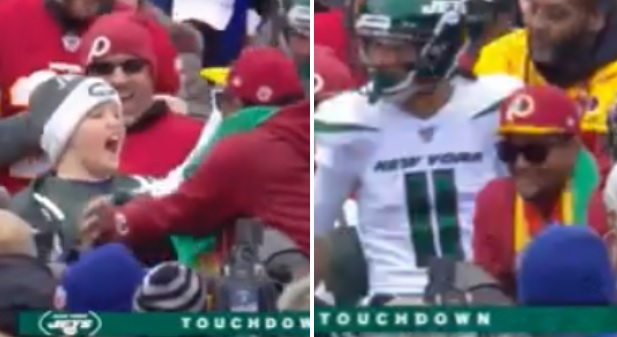 There’s something about gameday footballs/baseballs that makes adults go crazy in their pursuit of getting a souvenir.

During Sunday afternoon’s Jets-Redskins game, Jets WR Robbie Anderson jumped into the stands to celebrate his touchdown and an adult Redskins fan made sure he went home with the ball instead of the kid standing next to Anderson.

A young Jets fan almost had a TD ball from his team until a Redskins fan snatched it pic.twitter.com/Rz2hBAw5UB

Class move by the @Redskins fan stealing a ball from a kid. #nyjvswas pic.twitter.com/fu1wM9QBj7

The Internet was not happy with the Redskins fan.

That Redskins fan needs to give that little kid the ball back. Not cool. #NYJvsWAS

That Redskins fan just take away Anderson's football from a little kid? Savages.

Redskins @Redskins look at the game tape and help that young @nyjets fan out. An older gentleman redskins fan stole that gameball from a kid.

S/o to the adult Redskins fan who stole the ball from the kid Jets fan. Ha JK you're a POS #NYJvsWAS