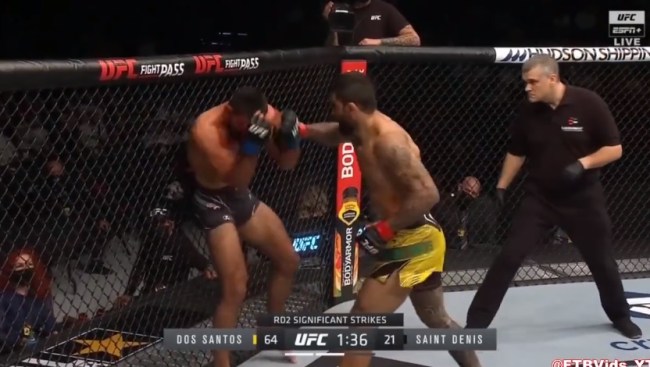 UFC fans are not happy with referee Vyacheslav Kiselev for his performance at UFC 267.

While Benoit Saint-Denis was getting beat down by ElizeuZaleski dos Santos, Kiselev refused to stop the fight despite pleas from commentators calling the fight.

After the fight, disgusted fans and experts called for Kiselev to never ref another fight again.

Holy Hell, @marcgoddard_uk @MarcRatnerUFC I just watched the worst job of officiating at an @UFC event ever!!! Please just don’t let him do another fight….. EVER!!!

Honestly the worst performance I have seen from a referee in my life. Honestly a hard job but man unreal. Makes you respect the good ones like @JasonHerzogMMA @JohnMcCarthyMMA @HerbDeanMMA and many more. I hated watching that I hope Benoit is heading to hospital right now !

Let's not use referee Vyacheslav Kiselev for the rest of the night. UFC broadcast team accurately tearing him a new one for fumbling this fight. #UFC267

This ref is an absolute clown.

Update: Kiselev was removed from the card according to reports.

Ref has been removed from the event for the rest of the night after that terrible Zaleski/St. Denis fight. #UFC267