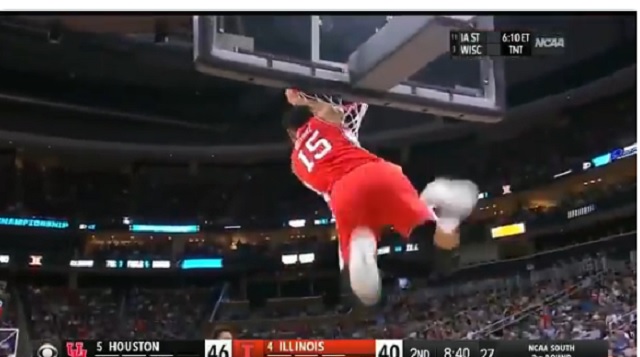 We officially have the worst call of the NCAA tournament.

During a tight second-round game between Illinois and Houston on Sunday, a ref called a technical foul on RJ Melendez for hanging on the rim during a dunk even though it was clear Melendez swung forward to not fall and hurt himself.

Reggie Miller not having any of this lame ass technical call for hanging on the rim. pic.twitter.com/1zFwoVJGeI

Here’s what rules analyst Gene Steratore had to say about the call.

Completely agree with @ReggieMillerTNT that this should not have been a technical foul on RJ Melendez.

RJ’s momentum carried him towards the basket and he didn’t hang for an extended period or in an unsporting fashion.#MarchMadness pic.twitter.com/SukohTBggO

It was clear that Melendez swung forward during the dunk to not fall and hurt himself.

Fans went on to blast the refs in the game over the call.

And they call this a tech??

Ref calls a T on Melendez for hanging on the rim after a dunk. It happened right in front of me. He pretty clearly swung forward as not to hurt himself.

That call belongs in the trash.

That's the worst tech of the year. If he doesn't hang, he falls.

This ref calling the tech on the Illinois kid for hanging on the rim should be arrested immediately and held without bail because he obviously has no idea what his job is and he constitutes a clear public menace.