Ref Crashes Into Cowboys’ Center While Trying To Spike Ball, Ignites Debate About Whose Fault It Is 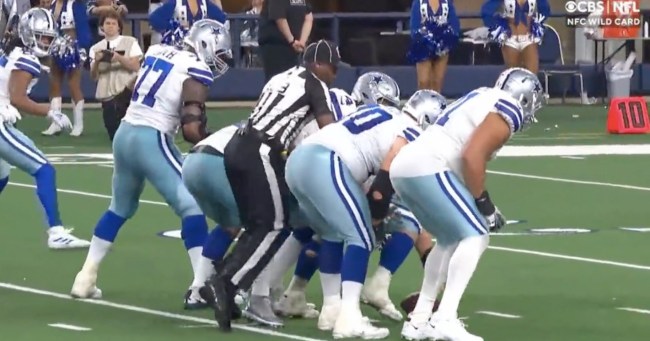 The ending of the Wild Card game between the San Francisco 49ers and Dallas Cowboys was a controversial one, as it appeared that the ref got into the way of the center and Dak Prescott, therefore delaying the spike and a final shot at the end zone. As Tony Romo and CBS football rules analyst Gene Steratore pointed out, the rules state that the ref must touch the ball prior to it being snapped, which would explain why he barged onto the scene.

“You can’t set your own ball as a center. You’ve got to give it to the ref. Dak Prescott should have looked and found the ref. You can’t give it to your center,” Romo said.

It should also be noted that the Cowboys found themselves in this situation because they bizarrely ran a quarterback draw with time running down. Had they thrown the ball into the endzone instead, an incomplete pass would’ve stopped the clock, while a completion would’ve tied the game.

The ref didn’t give the Cowboys the ball in time lol pic.twitter.com/fuSuqVv21e

Tony Romo explaining why it was Dak’s fault for not giving the ref the ball on final play pic.twitter.com/HTqhAjfGnw

This isn’t the first time this happened, however, as a similar incident occurred earlier in the game:

The ref caused that delay of game on the Cowboys lol pic.twitter.com/NbnBkOHxXh

Following the incident, NFL fans (and some players) took to Twitter to react to the moment, which marked the ending of the game between San Francisco and Dallas.

That can't be delay. The ref wouldn't let 'em snap it!

these refs are gonna need a police escort outta the stadium. my god.

The refs after announcing the game had ended… #DALvsSF pic.twitter.com/rOC7H9lZX8

NFL Refs to Cowboys players after the final play pic.twitter.com/JaGnUS7vCU

THE REF HUMPED HIM FOR THE LAST 2 SECONDS LMFAOOOOOOO

The refs after saying “The Game is over”, at the end of the Dallas Cowboys game 😂 #DALvsSF pic.twitter.com/OuGlEHQkoG

spiked with 1 second left and refs call it game

referees vs the cowboys as always

Them refs got out of there lol

As a result of the Niners’ 23-17 victory, they’ll head up to Green Bay to take on Aaron Rodgers and the Packers, while Tom Brady and the Tampa Bay Buccaneers will host the winner of tomorrow night’s game between the Arizona Cardinals and Los Angeles Rams.

Over in the AFC, if the Kansas City Chiefs, who are favored by almost two touchdowns, beat the Pittsburgh Steelers, they’ll host the #3 seed Buffalo Bills, while the #4 seed Cincinnati Bengals, who advanced to the Divisional Round with a victory over the New England Patriots, will travel to Tennessee to take on the #1 seed Titans.

RELATED: NFL World Dunks On Jerry Jones For Building A $1B Stadium That Blinds Players With Sunlight