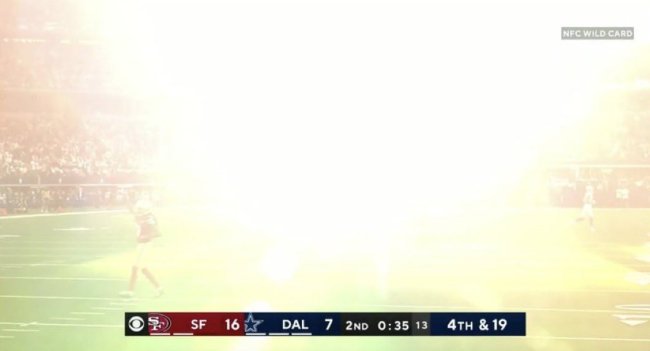 During Sunday’s Wild Card game between the #3 seed Dallas Cowboys and the #6 seed San Francisco 49ers, there were a handful of occasions in which players were being blinded by the sun.

AT&T Stadium was built in an East-West direction, so there are certain hours where the sunlight pours through the massive windows and onto the field, occasionally obstructing the players’ eyesight. In addition to the sun problem, AT&T Stadium famously has a massive scoreboard screen that can be hit by punts.

Because the internet always gets a kick out of dunking on Jerry Jones, football fans took to Twitter to clown on the fact that Jerry paid $1.3 billion to build a stadium with such glaring (bonus points for the pun) design flaws.

Jerry Jones spent $1.5B on a stadium that blinds receivers and blocks punts pic.twitter.com/rtZD3EpTzU

"We're going to build the stadium East-West, so the sun completely blinds the players on the field. Also, the scoreboard will be low enough for your punter to hit it."

"How much will it cost?"

"Who spends a billion on a football stadium and builds it facing East and West?" – Phil Simms pic.twitter.com/wCgBBGgCDg

"Billionaire owner builds ostentatious, taxpayer-funded stadium with design flaws that prove to be his own undoing" feels a little on the nose even for Jerry

People asking why the cowboys haven't done anything about the stadium sun problem don't truly understand how stubborn the Jones family is.

Still cannot believe that the Cowboys built a stadium with east-west orientation and still decided to put huge windows in it so the playing field is covered in blinding light at the exact time when the Cowboys typically play games. It would have been so easy not to do this

When your billion dollar stadium is hurting your team pic.twitter.com/HGfQuzaMqb

Watching your $1.5 BILLION stadium hurt your team like pic.twitter.com/mWzNTDbS77

Should the 49ers beat the Cowboys, they’ll head up to Wisconsin to take on presumed (and defending) NFL MVP Aaron Rodgers and the #1 seed Green Bay Packers, who earned a Wild Card weekend bye thanks to their 13-4 regular-season record. The winner of the game between the Los Angeles Rams and Arizona Cardinals will then take on the #2 seed Buccaneers in Tampa Bay.

Meanwhile, in the AFC, both the Cincinnati Bengals and Buffalo Bills advanced to the Divisional Round thanks to their victories on Saturday over the Las Vegas Raiders and New England Patriots, respectively. On Sunday night, the #7 seed Pittsburgh Steelers will take on the #2 seed Kansas City Chiefs. If the Chiefs win — which they should do, consider they’re favored by 13 points — they’ll host the #3 seed Bills next weekend, while the Bengals will travel to Nashville to take on the #1 seed Tenessee Titans, who are currently enjoying their bye week.