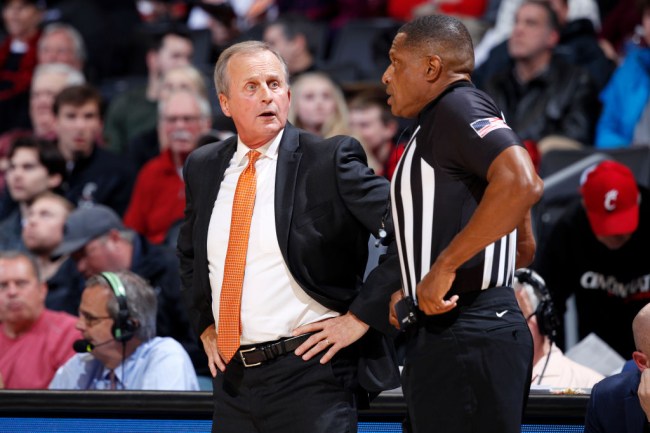 Tennessee played host to Texas A&M on Tuesday night and things did not go well for the Vols. Somehow, someway, the Aggies shot just 30.4% from the field compared to Tennessee’s 46.7% shooting percentage and handed the Vols 63-58 loss in their own building.

There’s also the fact that Texas A&M outrebounded Tennessee 46-21, which may have had something to do with the Vols finding a way to lose at home to a pretty underwhelming Aggies squad.

The fact Tennessee lost the game wasn’t the only bad or odd thing that happened on Tuesday night.

As the game was winding down, official Mike Nance walked toward the scorer’s table, where head coach Rick Barnes was standing and walked directly into Barnes bumping shoulders. The official clearly sees him standing there, Barnes doesn’t move at all, but neither did the official.

This entire exchange is just weird as hell. Barnes was clearly going to stand his ground, as one does who’s literally standing still. It’s on the person walking to actually dodge the person not moving, but Nance didn’t get that memo. Nance immediately turning to Barnes saying ‘did you just bump me’ is an incredible move, nonetheless.

Because, don’t forget, those people wearing black and white striped shirts are superior beings that are never wrong about anything.

If it was Barnes that walked over and bumped an official, I think the arena’s roof would have opened up and some NCAA official would have come down personally handing him a note saying he’s suspended until the end of days, without pay.

It’s safe to say Tuesday night’s game is one Barnes is going to want to forget.